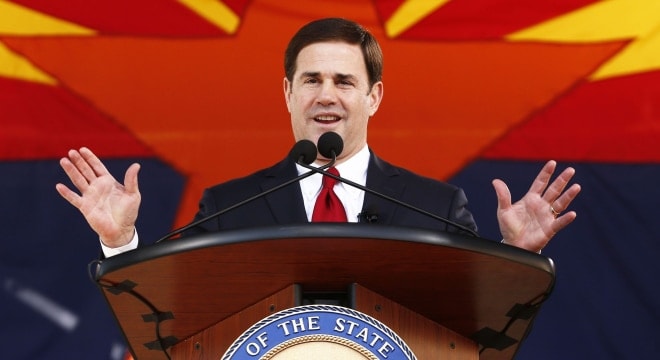 Gov. Doug Ducey signed a measure this week that safeguards the sale or gifting of personal items, be it furniture or firearms, without government involvement. (Photo: Rob Schumacher/The Arizona Republic)

The measure signed by Gov. Doug Ducey this week, SB 1122, short circuits potential local requirements mandating a background check for the transfer of property between two private individuals. The proposal passed the Senate 16-14 in March and the House 32-23 last month.

Backers argued that the legislation would safeguard the sale or gifting of personal items, be it furniture or firearms, without government involvement.

“If I want to sell … any of my personal property, including weapons, I should be able to do that,” Rep. Anthony Kern said during floor debate. “It is up to me as a responsible seller to make sure I know who the buyer is. It’s called America and it’s called the Second Amendment.”

The legislation, now law, prevents any Arizona county, city or town government from passing a local ordinance or law requiring those selling, gifting or donating personal property from having to use a third-party database before transferring the items. While it applies to all general household goods, it would also preempt universal background checks on private gun sales.

Although no current person-to-person background check law exists in the state, during the bill’s legislative process former U.S. Rep. Gabby Giffords founded the Arizona Coalition for Common Sense with the goal of implementing such checks to include most private gun transfers and increasing mandatory gun surrenders in cases of domestic abuse. The group contends the number of gun deaths in Arizona is much higher than the national average and, citing figures from Everytown, that 62 percent of women who were killed by intimate partners in Arizona were shot to death.

While supported by the National Rifle Association and local Second Amendment groups, gun control advocates were opposed to the measure and had urged Ducey to veto it.

“Unfortunately, our elected leaders responded to the gun violence we see all too often in Arizona by passing a gun lobby-backed bill that will put our communities in danger,” said Annie Lamoureaux with Moms Demand Action in a statement. “Senate Bill 1122 does nothing but ensure that localities cannot require background checks for all gun sales to keep guns out of the hands of felons and other people with dangerous histories.”