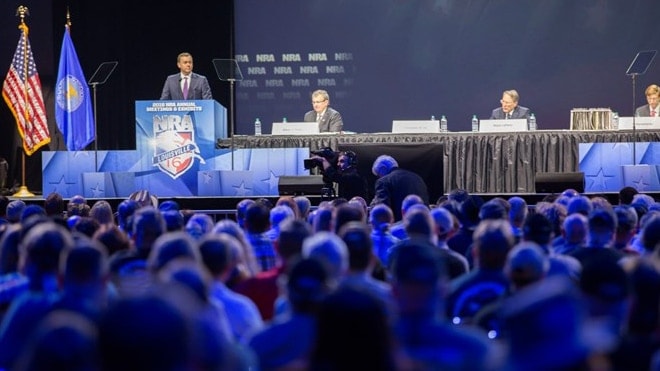 The NRA board sitting before an audience Saturday during the annual meeting of members in Atlanta (Photo: NRA)

Members of the National Rifle Association addressed typical internal political issues during its meeting at the organization’s conference in Atlanta on Saturday, but found themselves, albeit briefly, facing a quagmire of an issue.

Before the meeting, members submitted proposals to the board of directors in writing, which a would be read aloud before a half-full auditorium of a fully engaged audience. The members would then comment, debate and finally vote with placards.

Proposals included asking the White House to award the organization’s executive director a presidential medal, air grievances about other board members, congratulate themselves for past achievements, and, perhaps saving the most contentious for last, gender issues.

The language of that last measure said anyone wanting to participate in an NRA competitive event “will do so based on the gender/sex as assigned to that person at birth” and it will become part of the organization’s bylaws until repealed by a majority vote.

The proposal surprised the audience, who chuckled and grumbled at the hot-button issue. No one immediately voiced concern, but the elephant was sitting right there.

“Is there a second to the motion?” asked John Frazer, secretary for the NRA board. “I, er — I did not hear a second,” he said before a woman gave a quiet, inaudible shout. The secretary responded: “It was seconded? It’s been moved and seconded. Is there debate?”

A man approached the microphone at a podium in the back of the auditorium. “Mr. Chairman,” he said.

He introduced himself as David Coy, an NRA board member from Adrian, Michigan. He looked approachable, wearing a light-colored blazer and tie. He spoke like a teacher reciting a lecture.

“I offer a preferred motion,” he said. “I move to refer the resolution to bylaws in resolutions of legal affairs committee for determination after conferring with counsel whether the resolution is or is not lawful. I so vote.”

Frazer said: “It’s been moved. Is there a second to that motion?”

The audience answered his question with collective yeas uttered in unison as they fanned supporting placards above their heads.

“It’s been moved to refer to the resolution to the legal affairs bylaws resolution committee for a determination after conferring with counsel whether the resolution is lawful,” Frazer said.

Coy approached the issue pragmatically, considering long term affects — both legally and socially — passing such a resolution would have on his organization.

“I think that it’s important that this motion be referred because this is a lightning rod issue and we’re a lightning rod organization,” Coy said, adding while it’s an issue of serious concern for competitive shooting, “we’ve got to get it right out-of-the-box here, so I urge folks to support the motion to refer at this point in time.”

“Is there any further debate?” Frazer asked. “Here and now all in favor of the motion say yea—“ he started to say before a man approached the podium at the other end of the auditorium. “Do you seek the microphone?” Frazer asked.

“Hello,” said a man at the podium on the other end of the room.

“Bobby Reed, I’m from Walls, Mississippi,” he said and introduced himself. “I’m the one that entered the motion.”

Reed had a soft voice with a southern drawl and slight lisp. Unlike Coy or the executives, he dressed casually, wearing a t-shirt and baggy pants.

“This motion was not about hatred or homophobia by anyone. It is about competition and all,” he said. “But given the circumstances, I withdraw the motion at this time.”

“Is there any objection to withdraw the motion?” the speaker asked before giving a brief pause. “Here and now the motion is withdrawn.”

The audience applauded as any tension brought on by the issue had been lifted.