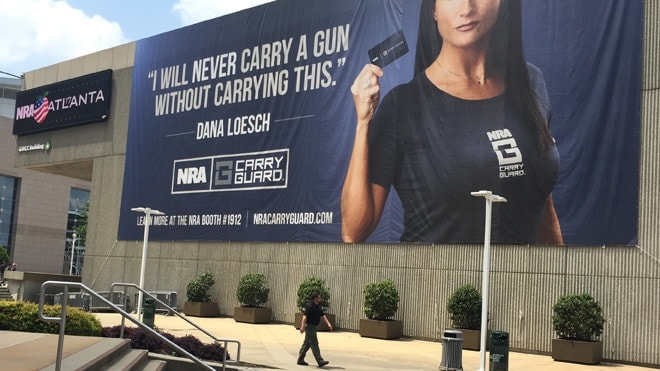 The NRA draped a sign over the side of the Georgia World Congress Center to promote the new self-defense insurance during the NRA annual conference April 27-30, 2017. (Photo: Daniel Terrill/Guns.com)

Every year, the National Rifle Association centers its annual conference on a theme that embodies a particular message. It’s easy to figure out. Show organizers advertise it all over the conference and the group’s spokesmen promote it through slogans in professionally produced videos and live speaking events.

During the past few shows, themes have included “Stand and Fight” to approach the growing debate over gun control, another year it was “we’re millions with 25 bucks” to encourage more people to buy a membership at a reduced rate, and another year it was “NRA: Freedom’s safest place” to suggest “freedom” would be less safe under an opposing candidate. But this year instead of a political message, the NRA unveiled a new iteration of its self-defense insurance called NRA Carry Guard.

The gun lobby described the program as “America’s most comprehensive insurance and legal coverage” for those who carry a gun. To introduce the program, the NRA shared details through select media, then in videos, and then made the official launch at the show. Like year’s past, attendants were inundated with promotional materials.

Outside Atlanta’s Georgia World Congress Center a giant sign draped over the side of the building with an NRA commentator with pursed lips wearing a Carry Guard shirt and holding her policy card. Just beyond the entranceway hung another sign with the words “Never carry a gun without carrying this” next to a policy card. Small stands with signage promoting Carry Guard peppered the arena. And then a banner in plain view above the escalator leading to the exhibit showroom was another Carry Guard sign that informed “Visit NRA booth 1912 and get a free hat.”

At the showroom entrance sat the NRA’s booth where representatives guided guests toward kiosks designed to streamline policy sales. Charismatic NRA spokesman Colion Noir sat at a table placed between the kiosks to sign autographs, pose for pictures and give out hats. And then behind them were monitors so guests could sample the program. Attendants swarmed to the booth. Some to pursue a curious notion or get a free hat while others were genuinely interested in the product.

Karl Thomason, an NRA life member from the Atlanta area, used the virtual simulator after watching his son and nephew try it. Standing in front of a giant monitor showing a rotating NRA logo, he gazed across the virtual world through a pair of goggles and eventually pointed a controller, which looked like a handheld garment steamer, and depressed the trigger. Moments later, he dropped the controller. As it dangled by a cord from his wrist, he raised his hands in the air. The entire virtual experience lasted only a few minutes.

“It was really pretty interesting,” Thomason said, adding “You’re standing in line at a convenience store and all of a sudden somebody comes in to rob it. You know, if I had been standing there truly with my handgun I don’t know how I would’ve reacted. I know I was in a virtual simulator there. But hopefully I would’ve reacted the same way and been able to protect somebody in the event something was to happen.”

But the simulator allowing users to respond to a realistic self-defense scenario and police interaction was just a crash course into the program. Those who signed up for policies would receive training and instruction at a later date to understand possible legal ramifications of using a gun in a self-defense scenario.

Although he had fun, Thomason didn’t sign up for a policy that day. Not because he didn’t want it, but because he already had coverage from another provider. When that policy expires, though, he said he would consider Carry Guard. “I know anything the NRA does is fantastic and first class. I know that it would be a great resource to take advantage of,” he said.

The NRA began offering self-defense insurance long before unveiling NRA Carry Guard, but has not made such a concerted effort in promoting it, at least not in the past six years. Plus, the new policy offers a broader and more inclusive package than before.

Jason Brown, an NRA media relations manager, told Guns.com the NRA introduced Carry Guard in response to member feedback. “They told us there was a vacuum in the training market. That there wasn’t a one-stop solution to get the training and the peace-of-mind they needed to be able to defend themselves in a defensive firearm scenario,” Brown said.

According to the program’s website, the NRA offers three policies that range in price from $155 per year to $360 for civil and criminal defense. Basic benefits include the training, legal and other assistance and a quarterly magazine subscription.

Brown said thousands of NRA members at the conference visited the NRA booth and tested the simulator, but he did not say how many bought policies or how many policies the NRA expected to sell.

“There is no goal for us of what we want to raise,” he said, adding “There’s no amount of money that this organization can put on ensuring that anyone that wants to learn, train and be able to defend themselves, their homes and their families can do so without having to worry about finding themselves on the wrong side of the law. That’s priceless. And that what’s the NRA committed to do.”

Without actual figures, it’s difficult to estimate revenue the insurance program will generate, but as a nonprofit the goal isn’t net income.

According to the NRA’s 2016 financial report, the organization earned a total of $433.9 million, up $45.3 million from the year before likely due to the election cycle. That figure is comprised of 37.7 percent membership fees, 39.5 percent contributions, 15.9 percent program fees and 6.8 percent investment and licensing income. However, 80 cents of every dollar earned was used for program services and the other 20 cents went towards administration and fundraising.

“This will never change anything about the status of the organization,” Brown said. “The NRA is a nonprofit, member driven organization. It always has been and always will be.”