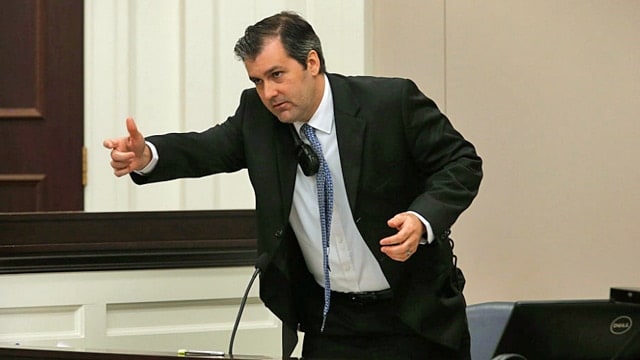 A former South Carolina police officer pleaded guilty Tuesday to using excessive force, and depriving a man of his rights when he shot him in the back five times as he ran away during a 2015 traffic stop.

Michael Slager, 35, took a plea deal with prosecutors nearly a year after pleading not guilty to charges stemming from the shooting death of 50-year-old Walter Scott. Slager pled guilty to the first of three counts, Deprivation of Rights Under Color of Law.

“The defendant used deadly force even though it was objectively unreasonable under the circumstances,” the plea deal says. “The Defendant acknowledges that his actions were done willfully, that is he acted voluntarily and intentionally and with specific intent to do something that the law forbids.”

In exchange for the guilty plea, the government will ask the court to apply sentencing guidelines for second degree murder and obstruction of justice. The court is not bound by the government’s request, and Slager could still face up to life in prison.

Slager, who is white, shot Scott, who was black, after pulling him over for a busted tail light in North Charleston, South Carolina, on April 4, 2015. Scott bailed on the traffic stop, and during a foot chase, Slager attempted to use a Taser on him twice, according to court documents. The second time, Scott fell down, but he got back up and continued to run. That’s when Slager pulled out his service weapon and fired at Scott eight times. Five of those shots hit Scott, and he died at the scene. The shooting was captured on cell phone video.

In a state murder trial late last year, prosecutors used that video to claim that Slager’s “first instinct after he cuffed the dead Walter Scott was to stage the scene.”

“He said Walter Scott came after him with the Taser and he shot him when he turned,” said prosecutor Scarlett Wilson. “He said, ‘He ran away with my Taser.’”

Wilson pointed out that the Taser fell to the ground before the shooting. She said Slager ran back to get the Taser so he could put it near Scott’s body. On the witness stand, Slager denied trying to plant evidence. After four days, the jury deadlocked and it was declared a mistrial.

The case is one of several instances of white officers shooting unarmed black men, an excessive force narrative that’s fueled nationwide outrage. The Obama administration’s answer to such instances was to investigate police departments for evidence of civil rights abuses. If departments were found to consistently violate the Constitution, the Department of Justice initiated so-called consent decrees to help reform the departments.

Attorney General Jeff Sessions has been critical of those Obama era consent decrees, and announced earlier this year that his office would ‘pull back’ on such efforts. Slager’s plea deal is one of the first resolutions to a high profile, police involved shooting with Sessions at the helm.

In a statement Tuesday, the attorney general said the Department of Justice will hold officers accountable for using excessive force and violating the civil rights of citizens.

“Such failures of duty not only harm the individual victims of these crimes; they harm our country, by eroding trust in law enforcement and undermining the good work of the vast majority of honorable and honest police officers,” Sessions said. “As our Department works to support the courageous and professional law enforcement personnel who risk their lives every day to protect us, we will also ensure that police officers who abuse their sacred trust are made to answer for their misconduct.”

Jury selection for a federal trial had been slated for later this month, and a state trial was set for August. But Slager’s guilty plea resolves both the federal and state cases that were pending against him.