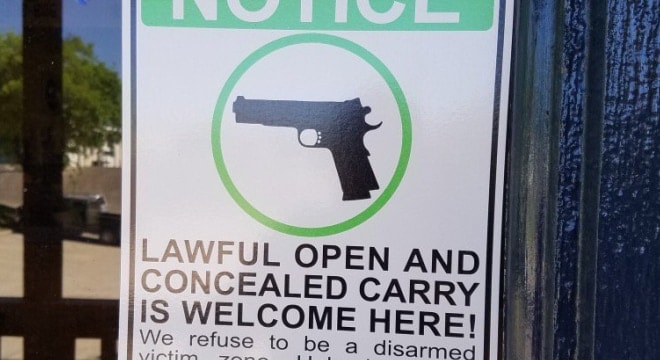 Over one million Texans have a current carry permit, which allows for both open and concealed carry, though the price for the license is one of the highest in the nation (Photo: Gov. Greg Abbott/Twitter)

The House this week voted in favor of a Senate bill greatly reducing the handgun licensing fee in the Lone Star State.

The House on Tuesday tentatively approved in an 111-30 vote SB 16, which would drop permit fees from $140 to $40 on first-time applications and renewals from $70 to $40, setting the measure up for a third and final reading in the chamber. A legislative priority for Lt. Gov. Dan Patrick, Texas has some of the highest handgun license costs in the country.

“The fee is currently so high that it impairs a lot of people’s ability to get a license to carry,” said Rep. Phil King, R-Weatherford, author of the House companion bill.

A 2016 survey by the Crime Prevention Research Center found that licensing fees vary widely across the nation from a low of $10 in South Dakota to over $150 in Illinois, putting the Texas rate at the high end. The report also found that each $10 increase in fees reduces the percent of adults with permits by about a half a percentage point.

The measure has the support of the National Rifle Association, who noted in a legislative alert on the measure that, “No law-abiding Texan should be priced out of the ability to exercise his or her right to self-defense.”

While the Senate passed the bill 25-6 in March, House lawmakers amended the proposal to further waive fees for law enforcement, which needs to be approved by the senior chamber before heading to Gov. Greg Abbott’s desk for likely signature.