AR-15 among guns recovered after 2 officers shot in Chicago 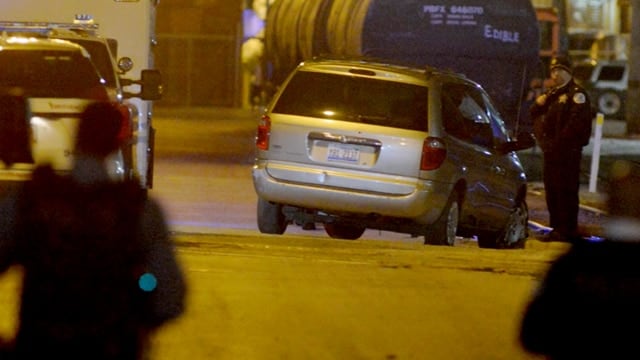 Police surround a Chrysler van after two officers were shot in the Back of the Yards neighborhood in Chicago Tuesday night. (Photo: Nuccio DiNuzzo/Chicago Tribune)

Two plainclothes police officers were wounded Tuesday night on Chicago’s southwest side when gunmen in two vehicles pulled alongside their van and opened fire, one of them using an AR-15 rifle.

Three people were being questioned in connection with the shooting, and two guns have been recovered, according to Chicago Police Department spokesman Anthony Guglielmi.

One officer was shot in the back, and the other in the arm and hip. Both officers were released from the hospital Wednesday, and are “recovering at home.”

“It’s a miracle the officers are still alive,” Guglielmi said.

The shooting happened just after 9 p.m. Tuesday near 43rd and Ashland in the Back of the Yards neighborhood, according to the Chicago Tribune.

Police say the two officers were in an unmarked tactical van investigating a shooting earlier in the day when the two cars pulled up and started firing “indiscriminately.” The officers returned fire, but the cars sped off. A Chrysler minivan was found about two miles away at 38th and Racine Avenue. A rifle was found near the vehicle. A handgun was also recovered, and detectives “expedited ballistics and gun traces,” Guglielmi said.

Police said it appeared the officers were followed and targeted.

“Make no mistake about it, we are going to catch them,” said Chicago Police Superintendent Eddie Johnson at a press conference Tuesday night. “We are going to get these individuals responsible. Because, listen, if they will fire at police officers like that, then they have no thought process of…firing at other citizens of this great city.”

Members of the La Raza street gang are suspected of being responsible for the shooting, law enforcement sources told the Chicago Sun Times. La Raza is one of four Hispanic gangs that have been linked to a surge in AR- and AK-style rifle shootings in the Back of the Yards and Brighton Park neighborhoods in recent months.

“My members are at risk, and the time has come for the city to acknowledge that the safety of our officers is paramount,” Graham told Michael Sneed at the Sun Times.

“Hundreds of Chicago Police officers have asked to be trained and certified in the use of long guns and they face a long waiting list,” said Ald. Edward Burke.

Burke and his colleagues say, if necessary, they’ll urge the City Council to set aside funds so more retired law enforcement officers can be trained and hired as instructors.

Former Chicago Police Superintendent Jody Weis allowed officers to carry semiautomatic rifles about ten years ago after two officers were almost shot by a man with an AK-47. A former FBI agent, Weis got nearly $200,000 worth of carbines for the department at the time.