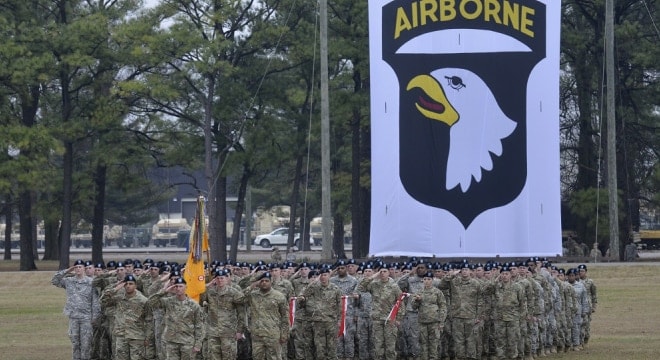 Army officials on May 3 announced the Fort Campbell, Ky-based 101st Airborne will be the first to use the new Sig Sauer handguns (Photo: Sam Shore/U.S. Army)

The “Screaming Eagles” of the 101st Airborne Division will be the first Soldiers in the Army to field the newly adopted Modular Handgun System.

Lt. Col. Steven Power with Program Executive Office Soldier told attendees at the National Defense Industrial Association’s armament symposium on Wednesday the Fort Campbell-based unit will be the first to issue the new handgun, produced by Sig Sauer, The Army Times reported. The initial use will occur as soon as this year as part of a 190,000-pistol buy.

“The latest budget was our first real knowledge of procurement dollars, which will adjust fielding schedules,” Power said. “However, we will definitely field Fort Campbell this year.”

The Army’s XM-17 Modular Handgun competition, conducted through Picatinny Arsenal in New Jersey, was announced in 2011 and saw a number of eager entries downselected until Sig, with a 9mm version of its P320, was adopted earlier this year. While Glock has filed a protest to the bid, FN recently released the 509 model, a modification of its entry to the competition.

The 17-round capacity M17 is set to replace the various versions of the M9 Beretta placed into service with the Army since 1985. Meanwhile, according to an article written by Matthew Cox for KitUp, the U.S. Navy, Air Force, and Marine Corps have announced they intend to adopt the M17 moving forward.