No federal charges for officers in fatal shooting of Alton Sterling 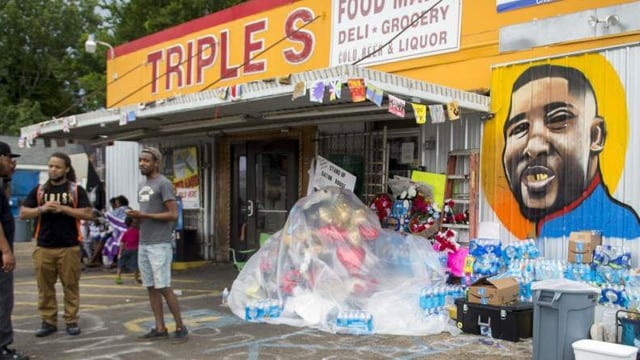 Two police officers will not face federal charges for last July’s shooting death of Alton Sterling outside of a convenience store in Baton Rouge.

The Justice Department announced the decision Wednesday following a 10-month investigation into the circumstances surrounding the police shooting.

Corey Amundson, acting U.S. Attorney for the Middle District of Louisiana, said “prosecutors have concluded that the evidence is insufficient to prove beyond a reasonable doubt that” Baton Rouge police officers Blane Salamoni and Howie Lake violated Sterling’s civil rights.  However, the two could still face state charges.

While announcing the decision not to file charge is unusual for his office, Amundson wanted to address public concerns head on. “We simply felt that making a public statement was the right thing to do in a case that meant so much to so many,” he said during a press conference Wednesday.

Amundson said in order to bring federal charges against the officers, they would have to prove beyond a reasonable doubt that they acted willfully and with specific intent. “Under this standard, it is not enough to show that an officer acted recklessly, or with negligence, or by mistake, or exercised bad judgment, used poor tactics, or even that the officer escalated the situation where he could have de-escalated it,” he said. “Those things are not violations of the federal criminal civil rights laws.”

On the night of the incident, Salamoni and Lake responded to calls about a man outside the convenience store where Sterling was killed. The first concerned a man selling CDs in the parking lot and in the second the caller claimed the man pulled a gun on someone and still had the gun in his pocket. Sterling was identified as that man for both calls.

Given the details, the officers approached Sterling as if he were armed, Amundson said, adding their priority was to secure the scene and weapon. In an attempt to do that, they asked Sterling to place his hands on the hood of the patrol car, but he refused. When they tried to detain Sterling, a struggle ensued, so they deployed a tazer. Sterling fell to the ground when they tazed him the first time, but he stood back up and ignored the officers’ commands to get on the ground. Salamoni then tackled Sterling after a second shot from the tazer was unsuccessful in subduing him.

Twice Salamoni yelled that Sterling was going for his gun and as Sterling continued to resist and ignore commands, Salamoni fired three rounds, striking Sterling in the chest. After firing those shots, Salamoni rolled away from Sterling and Lake stood behind him.

Seconds later, Sterling sat up with his back toward the officers, who were telling him to “get on the ground.” Sterling, who still had the gun, continued to move. At that point, unsure whether Sterling was reaching for the gun in his pocket, Salamoni fired another three rounds, which hit Sterling in the back. Salamoni then retrieved a loaded .38-caliber revolver from Sterling’s pocket.

The entire exchange between the officers and Sterling was less than 90 seconds, with the actual physical struggle lasting less than 30 seconds.

As part of the federal investigation, the Justice Department employed the expertise of multiple use-of-force experts, Amundson said. While those experts criticized some of the actions taken by the officers, they unanimously agreed that the use of force ultimately was appropriate.

“Given the totality of the circumstances – that the officers had been fighting with Sterling and had attempted less-than-lethal methods of control; that they knew Sterling had a weapon; that Sterling had reportedly brandished a gun at another person; and that Sterling was much larger and stronger than either officer – the Department cannot prove either that the shots were unconstitutional or that they were willful,” Admunson said.