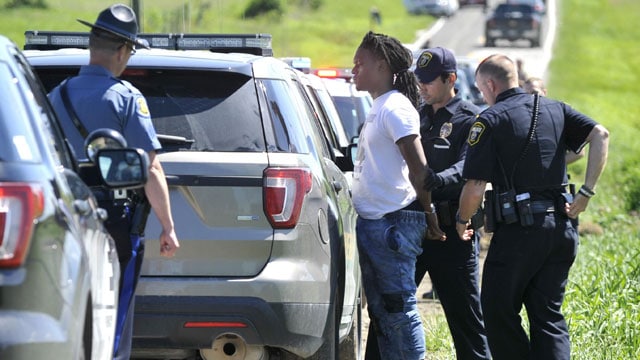 Court documents allege that on April 27, Powell and Humphrey, who were both armed, entered the Callaway Bank around 1:44 p.m., as Wilson waited in a getaway car outside.

Inside the bank, Powell and Humphrey both jumped over the counter and placed their guns to a bank teller’s head and demanded cash. The teller filled a plastic bag with $2,588, then Powell and Humphrey left the bank to meet Wilson outside in the getaway car.

Witnesses saw the men leave the area in a 2007 Chevy Impala and provided authorities with a description and registration information on the vehicle, which was located by a state trooper some 20 miles away. A pursuit then ensued, reaching speeds in excess of 100 miles per hour.

In an effort to bring the pursuit to an end, officers deployed spike strips, which disabled the vehicle. The trio then fled on foot, but were apprehended soon thereafter.

Once the trio was in custody, police also discovered a toddler was in the back seat of the vehicle, where the child had apparently been both during the bank robbery and the high-speed pursuit.

The vehicle used in the crime belonged to Wilson’s girlfriend, who was also the mother of the child. According to court documents, Wilson said he, Humphrey, and Powell planned the robbery, but he also “expressed his concerns for the ‘baby.’” Prosecutors noted, despite this, Wilson still chose to flee from the police and engage in a high-speed pursuit.

Even after officers discovered “a large sum” of cash concealed in his underwear, Humphrey initially denied his involvement in the bank robbery. But authorities determined a decorative retainer for the teeth known as a “grill” left behind in the bank during the robbery belonged to Humphrey. Powell, provided police with a false identity, also initially denied his involvement in the robbery.