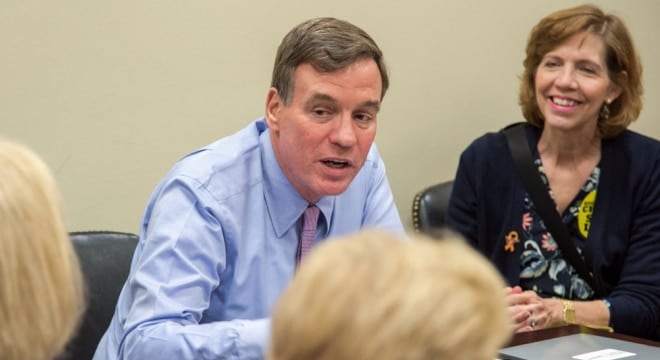 Virginia Democrat Mark Warner, who has backed gun control legislation in the past, says he will not support national reciprocity. (Photo: Sen. Herring’s office)

While calling himself a “proud supporter of second amendment rights” the U.S. Senator whose constituency includes the National Rifle Association’s headquarters pushed back against a national concealed carry proposal.

U.S. Sen. Mark Warner on Wednesday slammed S. 446, a Republican-backed measure that would see concealed carry permits largely treated the same way that drivers licenses are with the respect that they would be recognized in every state. Warner met with gun violence survivors and their families on the lead up to his announcement that he could not support the bill.

“Virginia has determined what it deems to be appropriate concealed carry permitting standards, but neither the Commonwealth nor any other state should be subject to national laws that would override those standards and result in a race to the bottom,” he said in a  statement.

“I’m a proud supporter of second amendment rights and will always advocate for responsible gun ownership for hunting, recreation, and self-defense,” Warner said. “But enough is enough. This tragic violence has to end. Knowing what I know today, if and when S. 446 comes before the Senate for a vote, I will oppose it in the interest of the safety of all Virginians.”

Republicans, with a narrow majority in the chamber, would need to entice at least eight Dems to cross the aisle and support S. 446 to overcome a possible filibuster. It currently has 36 co-sponsors, all Republicans.

The measure, which has 191 supporters for its House version, would likely have less of an issue in the lower chamber due to the more robust GOP numbers there.

Gun control advocates, some of whom have drawn a $25 million line in the sand on the issue, welcomed the news from Warner, citing that his district includes the NRA’s headquarters in Fairfax.

“Federally mandated concealed carry reciprocity is a dangerous proposal that conflicts with the values of most Americans, ” said Coalition to Stop Gun Violence Virginia State Director Lori Haas in a statement. “Allowing armed concealed carry permit holders from states with weak permitting laws to carry across the country has long been a priority for NRA leadership. Senator Warner — the NRA’s home state senator — sent a powerful message to them today.”

In a statement, Everytown argued that Warner had supported national reciprocity in 2009 and 2013.

“For months, gun safety advocates and gun violence survivors have urged Senator Warner to take a stand for the safety of our families and communities by rejecting this dangerous and chaotic policy,” said Jennifer Herrera with Moms Demand Action’s Virginia chapter in a statement. “We’re thrilled that Senator Warner listened to our concerns and urge other members of the Virginia delegation to take note of his leadership.”

In 2013, Warner voted with most other Democrats to support the Manchin-Toomey expanded background check bill, which in the end came up short. Subsequently, the National Rifle Associaton gave the incumbent a “C” rating against Republican challenger Ed Gillespie in the 2014 election cycle. Prior to his vote on Manchin-Toomey, Warner had an “A” rating from the group when he ran for the Senate in 2008.