Report: Arlington National Cemetery will run out of space by 2043 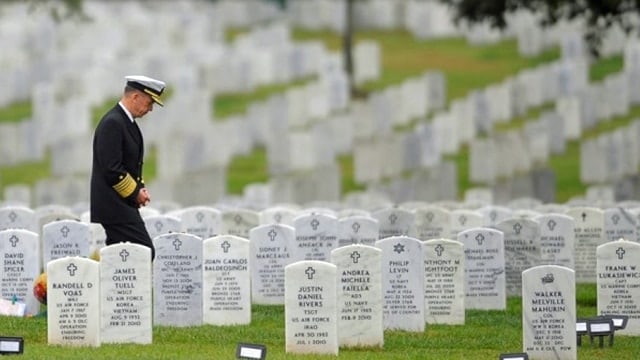 Arlington National Cemetery is expected to be full by 2043, and the Army is asking Congress to help find ways to delay that inevitability.

Redefining eligibility requirements, and expanding the boundaries of the cemetery are the two key ideas outlined in a 71-page report released last week, which asks Congress for swift action to help keep the cemetery active for another 150 years or more.

“Arlington National Cemetery is at a crossroads,” the report says. “When one thinks of ANC, it is natural to envision it stretching on forever – not only in physical space, but in time. The truth is that ANC is running out of space.”

“Most veterans from the recent wars in Iraq, Afghanistan, and the War on Terrorism will not have the option to be buried at ANC,” the report says. “Even our heroes who are killed in action or those who have earned the Medal of Honor will not be buried at ANC within approximately three decades due to the lack of space.”

“Every day and year that passes without a decision brings the cemetery closer to capacity,” the report says.

Eligibility requirements have been changed at least fourteen times in 15 decades, but significant changes haven’t been made since 1980. Currently, service members killed in action, those who die on active duty, retirees, and those with qualifying awards (Medal of Honor, Silver Star, Purple Heart and others) are eligible for in-ground interment and inurnment, according to the report. Spouses and some dependents are also eligible. Any veteran with honorable discharge and at least one day of active duty service is eligible for above ground inurnment.

The report outlines seven possible changes to those eligibility requirements, the most restrictive of which would allow only service members killed in action and/or Medal of Honor recipients to be buried at Arlington. This option would keep Arlington active for another 200 years, according to estimates outlined in the report.

The authors of the report acknowledge that it might not be the most popular route. “It would exclude the large population of retirees and honorably discharged veterans, some of whom may already envision being laid to rest at ANC,” the report says.

Other possible eligibility changes include requiring those buried to have a 24 month active duty service minimum, or restricting eligibility to retirees with certain lengths of service, for instance 25 or 30 years.

Another way to extend the life of Arlington is to acquire new land. Two expansion projects are already under way for the cemetery. The Millennium Expansion will add 27 more acres of land at a cost of more than $81 million. It’ll be completed later this year, and it’s expected to add seven more years of life to the cemetery assuming eligibility requirements stay the same.

The Southern Expansion project is still in the planning stages. It would cost $274 million and would add 38 more acres of land, giving the cemetery an estimated 10-15 more years of operation. In the report, the Army asks Congress to continue funding that project. It also asks for the government to transfer some of the 448 acres of adjacent, government-owned land to the cemetery, including land currently owned by the National Park Service and the Department of Defense.

Other options include establishing a new national cemetery in a new location, reimagining new ways to use existing space, preventing future monuments from being built at Arlington, and other ideas.

“ANC’s capacity shrinks with each passing day, so it is imperative to act quickly and decisively in order to proactively shape its future,” the report says, adding “In the 1960s, ANC was only two years away from closing before the issue received attention at the national level. Today, we have the opportunity to act far sooner.”