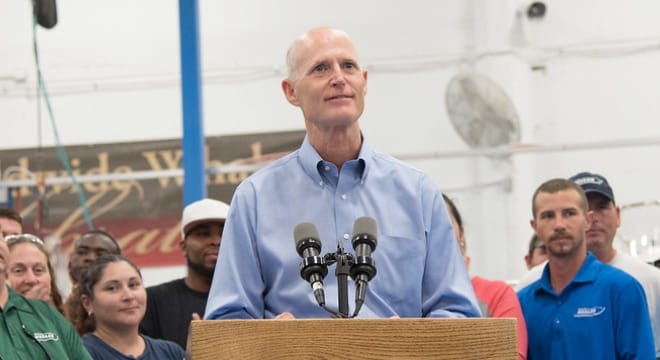 Republican Gov. Rick Scott is expected to sign a bill requiring prosecutors to provide “clear and convincing” evidence to move forward to trial in stand your ground cases. (Photo: FLGovScott)

In a Republican-heavy vote, the Senate gave its final approval on Friday to a bill that clarifies the state’s burden of proof in self-defense cases.

The legislation, SB 128, which expands justifiable homicide protections in Florida, was approved by the House 74-39 in April and 22-14 in the Senate last week, sending it to Gov. Rick Scott. The measure clarifies that the government, not the accused, has the burden of proof in a “stand your ground” immunity hearing, which supporters of the effort felt should have been the case all along.

The state legislature in 2005 passed a self-defense law that gave immunity from arrest, detainment, charging and prosecuting unless an investigation by the state reveals there was probable cause to believe the act was not, in fact, lawful self-defense. However, the Florida Supreme Court authorized prosecutors to use a special stand-your-ground hearing in which those under investigation must prove they are innocent rather than making the state prove guilt – and from there either apply charges and hold for trial or move to release.

Senate Bill 128 will reverse that process and holds that prosecutors will have to provide “clear and convincing” evidence to move forward to trial.

Gun control advocates argue the bill would require those using a stand-your-ground defense to be convicted twice, once at the hearing in front of a judge, then in a trial before a jury.

“This expansion would place an enormous burden on our state’s hardworking prosecutors, and further create a ‘shoot first, ask questions later’ culture that would threaten the lives of people in our state, especially those in marginalized communities,” said Michelle Gajda with Moms Demand Action in a statement. “I am absolutely heartbroken that Governor Scott is expected to sign this dangerous measure instead of listening to the legitimate concerns raised by gun violence survivors and state prosecutors.”

“They went too far when prosecutors and judges declared that a person is guilty until proven innocent in self-defense cases,” Hammer told Guns.com on Monday. “The bill restores the presumption of innocence in self-defense cases and puts the burden of proof back on the state where it belongs.”

“Since collusion between the Florida Prosecuting Attorneys Association and Bloomberg’s Mom’s Demand Action Florida group has become apparent, it should be obvious that many of Florida’s prosecutors are just plain antigun,” said Hammer. “Their job is to prosecute crime not create crime and make criminals out of law-abiding people.

Scott, a Republican with a strong record of signing pro-gun legislation and fresh off a speaking engagement at the annual NRA meeting in Atlanta, is expected to approve the bill. If he does, SB 128 would take effect immediately.