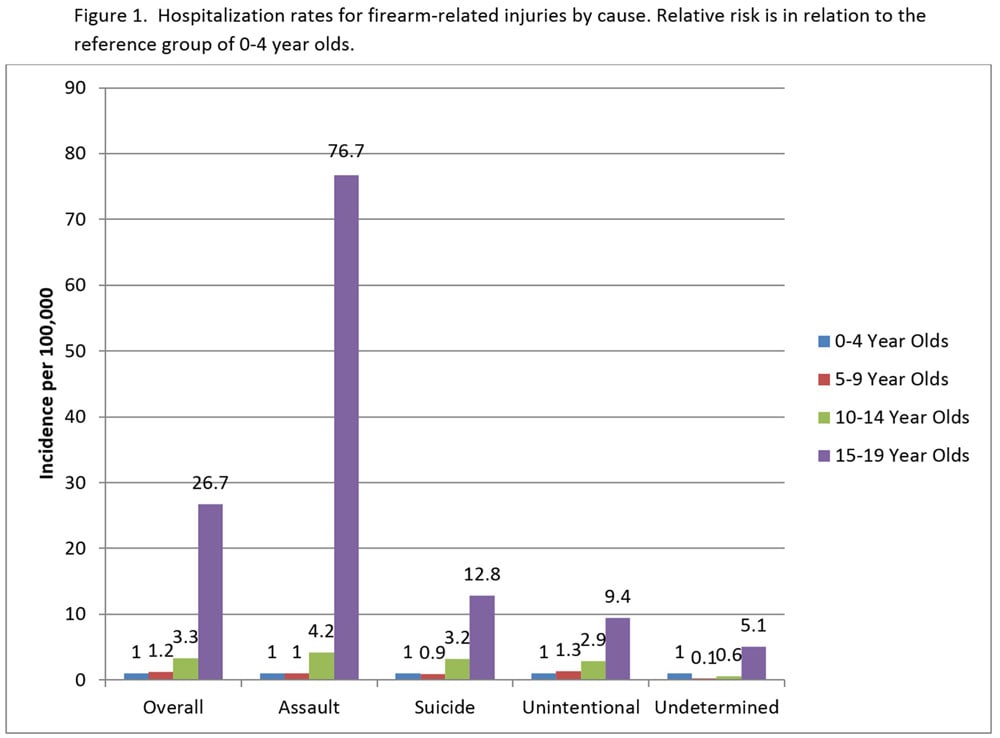 Graphic: Pediatric Hospitalizations due to Firearm Injuries in the U.S. in 2012

A new study shows more than 5,800 kids and teens, or about 16 each day, were hospitalized in the United States in 2012 for gun-related injuries.

The study, ”Pediatric Hospitalizations due to Firearm Injuries in the U.S. in 2012,” was presented at the 2017 Pediatric Academic Societies Meeting in San Francisco over the weekend.

The results found the majority of firearm-related injuries – over 60 percent – were caused during an assault; unintentional gunfire made up more than 27 percent; suicides accounted for 7.4 percent; and for the remaining 5 percent the cause was undetermined.

Youths aged 15 to 19 years suffered the largest number of gun-related injuries, making up an overwhelming 83.6 percent. Ten to 14-year-olds made up the second largest demographic at just under 10 percent, followed by 5- to 9-year olds at 3.6 percent and 4-years-old and under with just under 3 percent.

Additionally, males were far more likely to suffer gun-related injuries than females, who made up less than 13 percent of overall gunshot victims for the year, compared with over 87 percent for males.

Over half of pediatric gunshot victims were determined to live in an area that fell within the bottom 25 percent of median household incomes.

Statistics for the study were determined by examining the Agency for Healthcare Research and Quality Healthcare Cost and Utilization Project Kids’ Inpatient Database, or KID, which tracks pediatric inpatient hospital stays.

“The fact that 57 percent of firearm-related injuries in children under 15 years old were unintentional, for example, highlights the need for improved gun safety and storage practices,” she said.