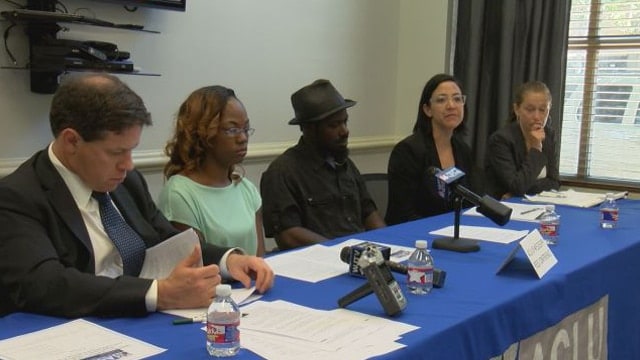 Plaintiffs and members of the ACLU hold a news conference Monday about the lawsuit they filed against the Madison County Sheriff’s Department. (Photo: WJTV)

Deputies in a majority white county in Mississippi are routinely targeting black people without reasonable suspicion of wrongdoing, according to a federal lawsuit filed Monday.

The suit alleges that Tucker was “deliberately indifferent” to constitutional violations, noting that he ignored a black deputy’s complaint about discriminatory practices, firing him the same month as the complaint, and hired a deputy with a history of misconduct involving excessive use of force. Under Tucker’s direction, the department has engaged in a “coordinated top down program” that targets black people for “suspicionless searches and seizures” via vehicular roadblocks in majority black towns, pedestrian “checkpoints” outside predominantly black housing complexes, and “warrantless and consentless” searches of their homes.

“As a result, many black residents of Madison County experience chronic fear and anxiety, disruptions to their everyday activities, restrictions on travel within their own neighborhoods and towns, and a tremendous reluctance to contact law enforcement officials for assistance when necessary,” the lawsuit says.

Tucker would not immediately comment Monday because he had not seen the lawsuit, a spokesman told the Associated Press.

On June 26, 2016, at about 7 a.m., six white sheriff’s deputies forcibly entered the home of Khadafy and Quinnetta Manning, a black couple who live in Canton, Mississippi. Their three sons, one of them five years old at the time, were all home as the deputies knocked on their front door and accused Quinnetta Manning of smoking marijuana in the home, according to the complaint. Quinnetta Manning told them she didn’t smoke marijuana. Without a warrant, the deputies barged in, and one of them shouted, “I know y’all seen what went on downstairs, so are you going to be witnesses or are you going to be suspects?”

The deputy was referring to a domestic dispute at a nearby home, and pressured the Mannings to sign a witness statement. They told the deputies they didn’t see anything, and refused to sign. That’s when one deputy handcuffed and started choking Khadafy Manning, who had just woken up and was in his underwear. After Quinnetta Manning told deputies he was disabled, they called him “Mr. Cripple.”

“A petrified Mrs. Manning finally said that she would write whatever witness statement the deputies wanted,” the complaint says. “Deputy #1 then told Mrs. Manning that he was going to take her husband to jail anyway, and started hauling Mr. Manning towards the front door.”

Quinnetta Manning pleaded with the deputy to let her husband get his cane, pants and shoes, but the deputy declined. Neighbors shouted at the deputy that the disabled Khadafy Manning couldn’t move as quickly as he was being dragged due to his disability, but the deputy ignored them and shoved him into the vehicle.

Once inside, the deputy punched Khadafy Manning in the head and hit him several times in the chest. Even after he agreed to sign a witness statement, the deputy continued beating him, and told him “his wife would be better off with him dead.”

Khadafy Manning signed a witness statement, as did his wife, and the deputy let him out of the vehicle. Crying, he “stumbled barefoot in his underwear back into his home as his neighbors watched.”

“Mr. Manning continues to feel deep shame at his inability to protect his family, as well as his public humiliation in full view of his neighbors,” the complaint says. “He still experiences intense feelings of sadness and depression about the incident.”

Another black man, 37-year-old Martin McField, was searched during a roadblock stop, handcuffed, locked in a hot car for 15-20 minutes with the windows rolled up, and beaten until he couldn’t breathe, before he was locked up in county jail for 19 days without being charged with a crime.

“Anytime I see a police officer, I feel my stomach drop,” said one of the plaintiffs, Steven Smith, according to a press release from the ACLU of Mississippi. “I can’t even walk to my house past the deputies without being stopped and searched.”

Smith was stopped at a pedestrian checkpoint in January 2017. Deputies checked his identification, which revealed that he had overdue fines and court fees, which he couldn’t pay. Smith was incarcerated at the Madison County Detention Center for 29 days.

“For black residents, Madison County is a Constitution-free zone where their right to equal protection under the law and against unreasonable searches and seizures is nonexistent,” said Jennifer Riley Collins, ACLU of Mississippi Executive Director.

“Nothing short of overhaul and rigorous long-term court and community oversight is required,” said Paloma Wu, legal director for the ACLU of Mississippi.

The suit seeks compensatory damages for the Manning family against the deputies involved in the June 2016 incident at their home. It also seeks awards for other plaintiffs in the class action suit.