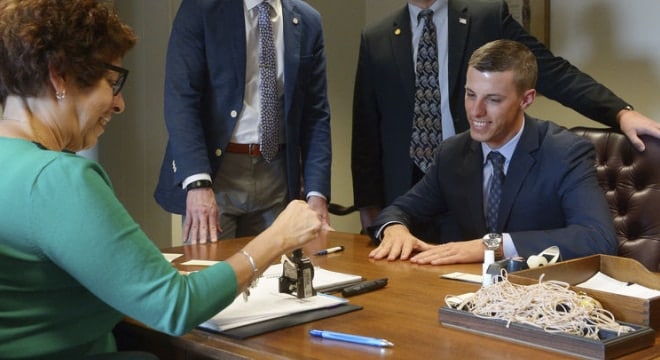 Legislation filed in the House last week would end the longstanding practice of registering pistols with law enforcement in Michigan.

Republican House Speaker Pro-Tem Lee Chatfield on May 2 introduced HB 4554, which would amend state law on pistol registrations. Chatfield argues there is no need for the state government to maintain a list of those who legally purchase handguns.

“Michigan is one of just six states in the country that still require handguns to be registered,” Chatfield said in a statement. “Criminals don’t register handguns they misuse for wrong, so what we end up with is a list that intrudes on the civil liberties of honest gun owners exercising their constitutional right to defend their families.”

His bill, which has 17 co-sponsors, would both end the registration practice and lift the $250 penalty from the books for those who failed to comply. Further, it would allow those who already have their information on file to have it removed.

As noted by Michigan Open Carry, the state has pursued various handgun registration schemes since 1913 and was the first in the country to have such a mandate.

Gun control advocates argue any relaxation of the law can translate into more crime.

The National Rifle Association, which supported the bill, contends there is no public safety value in the current law and that it does not help trace recovered firearms any faster than other methods.

Chatfield’s bill is awaiting a hearing and has been referred to the House Committee on Judiciary.