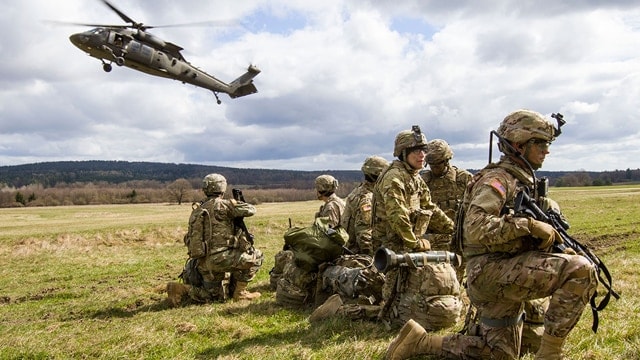 Military officials are looking at ways to reduce the weight of body armor, ammunition, and other equipment in an effort to lessen the cumbersome load soldiers and Marines have during combat operations.

Ground combat personnel carry or wear an average of 120 pounds of equipment, according to a Government Accountability Office report released earlier this month. The study outlines a number of possible ways to reduce that burden.

Over the years, the Army and Marine Corps have required more and more equipment to address operational threats in combat settings. The upgrades have offered advanced protection, but an unintended consequence has been significantly more bulk, which impedes mobility and reduces combat effectiveness, according to the report.

The GAO report cites Army Field Manual 21-18, originally published in 1990, which recommends that the fighting load for soldiers should not exceed 48 pounds, while the approach load should be less than 72 pounds. Marine Corps documentation suggests that anything more than 30 percent of body weight is likely to have “detrimental performance effects” for ground combat personnel.

Strategies to lessen the load include reducing the weight of commonly used ammunition, including .50 caliber, 7.62 mm, and 5.56 mm rounds.

“According to program managers, transitioning to polymer based ammunition casing could reduce ammunition weight by as much as 20 to 35 percent based on the weight difference between lighter polymer casing and traditional brass casing,” the report reads.

The Marine Corps started to test a .50 caliber round with a polymer casing in March. But reducing significant ammo weight for combat personnel would come from polymer casings for smaller-caliber rounds, something officials said would take a while to implement.

Additionally, the Army is working on ways to cut the weight of body armor plates by 20 percent, or about two pounds, by getting rid of excess ballistic protection. Some soft armor updates will see weight reductions of up to 50 percent, or about six pounds.

“Army and Marine Corps program managers said that when developing or improving PPE (personal protective equipment) and other equipment, they prioritize protection and operational capabilities, and that they have overarching goals of reducing weight, and improving form, fit, and function of equipment,” reads the report.

Other efforts to reduce weight include getting rid of heavy batteries. The Army is looking at ways to use more solar power, and to harvest and store energy from soldier movements. They’re also hoping developments in technology can reduce battery weight by up to 20 percent.

Improved resupply capabilities and the implementation of load transfer vehicles, which could carry thousands of pounds of equipment, would also reduce loads for ground personnel.

The Government Accountability Office conducted the study as part of a congressional requirement for the House Committee on Armed Services, which called for “detailed plans on integrating commercially available materials and advanced product design to reduce the load for all service members.”

The GAO offered no recommendations for action as part of the report.

Correction: A previous version of this story incorrectly abbreviated the Government Accountability Office as the GOA.