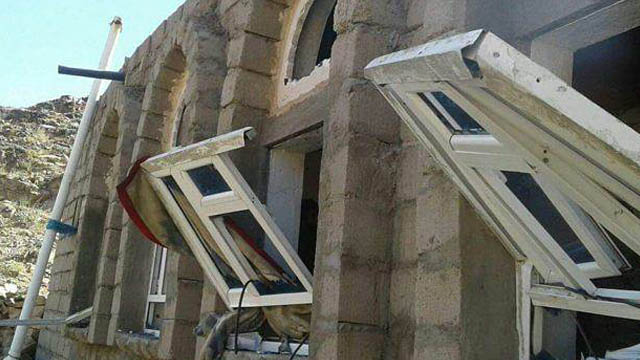 This photo released by a Yemeni organization purports to show a building damaged in the U.S.-led raid on Jan. 29. (Photo: National Organization of Drone Victims)

The American Civil Liberties Union filed a lawsuit Monday seeking the immediate release of government records pertaining to a deadly raid in Yemen earlier this year.

On March 15, the ACLU filed a Freedom of Information Act request to the Pentagon, the CIA, the Justice Department, and the State Department seeking records detailing the legal basis and decision making process used to conduct the raid. The ACLU says none of those agencies have followed through on the request, and the complaint filed Monday asks a federal judge to force the agencies to comply.

Little more than a week after his inauguration, President Trump ordered the Jan. 29 raid on the heavily guarded home of an al-Qaida collaborator in central Yemen. When it was over, a Navy SEAL was dead, as were several Yemeni civilians, including children. Despite the loss of life, the Trump administration called the raid a success, saying it yielded reams of valuable intelligence on al-Qaida.

But the ACLU isn’t buying the administration’s story. “Some of the information the government did release — including its estimate of the number of civilian casualties — conflicts with the estimates of a human rights organization and independent journalists,” the complaint says. “This raises questions about the legal and evidentiary standards by which the government is abiding and the information gathered as a result of the government’s official investigations.”

The complaint reiterates the details of the FOIA request, which seeks, in part, the legal and policy bases used to justify the raid, the process of the raid’s approval — including who “possessed decision-making authority,” before-the-fact assessments of civilian casualties of the raid, and details about the investigation into the raid — including the number and names of those killed and injured.

The ACLU also wants more information on a policy reversal that laid the groundwork for the raid.

In May 2013, the Obama administration implemented constraints on missions conducted in areas outside conventional war zones — an effort meant to curb civilian deaths from drone attacks. Trump quickly relaxed those rules, according to a report from the New York Times, which was referenced in the complaint. Five days after his inauguration, at a dinner with Defense Secretary Jim Mattis, Trump signed off on a measure temporarily declaring three provinces in Yemen as “areas of active hostilities” — a designation that loosens battlefield rules and bypasses the Obama-era constraints.

“The ‘temporary’ characterization of certain areas of Yemen as ‘areas of active hostilities’ gives rise to concerns about the process by which the administration made this designation and its factual and legal bases for doing so,” the complaint says.

The FOIA request, and the lawsuit, seek records clarifying the legal basis of that process. “We have seen that this White House cannot be trusted to give the public accurate information, which is especially critical when the president authorizes military action that kills civilians,” said Hina Shamsi, director of the ACLU National Security Project in a press release. “The Obama administration had a poor transparency record about lethal strikes in Yemen, but it at least put in place safeguards aimed at protecting civilians from harm.”

“The public has a right to know about any exceptions the Trump administration is making to civilian protection rules generally and what really happened with this tragic operation specifically,” Shamsi said.