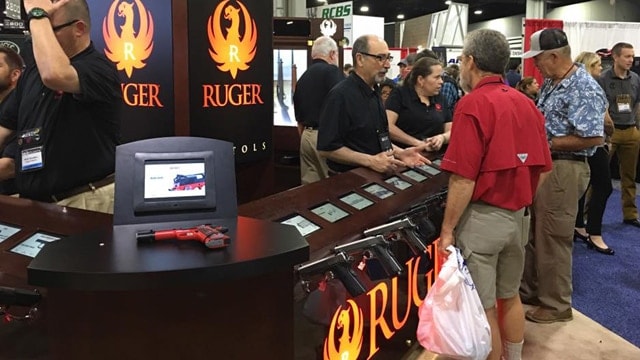 A man with a bag of stuff wanders through the Ruger booth at the NRA annual conference. (Photo: Ruger)

Investors reacted to sales decreasing only marginally for the Connecticut-based company, dropping a mere 3 percent from last year, according to filings with federal regulators. Ruger’s sales totaled $167.4 million from January through March, down from $173.1 million last year.

Price per share plunged following Republican’s sweeping election victories in November as the gun makers and retailers — and most of the nation — anticipated different results and prepared for a surge in demand. Yet, federal data shows gun sales maintained seasonal patterns through the holidays and into the spring without deviating much from last year’s results.