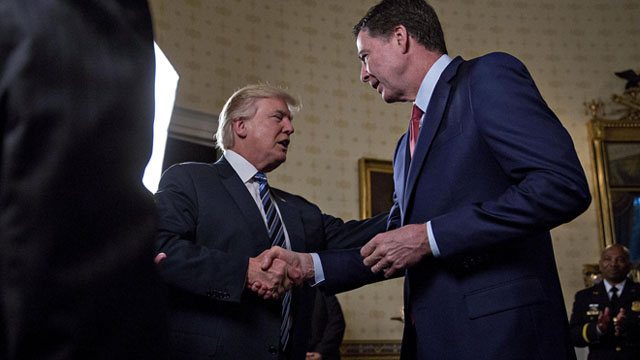 Comey, who has been leading an investigation into Russian interference in the 2016 presidential election, was notified of his termination via a five sentence letter from the president.

“While I greatly appreciate you informing me, on three separate occasions, that I am not under investigation, I nevertheless concur with the judgment of the Department of Justice that you are not able to effectively lead the Bureau,” Trump said.

In their recommendations, Attorney General Jeff Sessions and Deputy Attorney General Rod Rosenstein cited Comey’s handling of the criminal investigation into Hillary Clinton’s emails as a violation of the public trust.

“I cannot defend the Director’s handling of the conclusion of the investigation of Secretary Clinton’s emails, and I do not understand his refusal to accept the nearly universal judgment that he was mistaken,” Rosenstein said. “Almost everyone agrees that the Director made serious mistakes; it is one of the few issues that unites people of diverse perspectives.”

“Based on my evaluation, and for the reasons expressed by the Deputy Attorney General in the attached memorandum, I have concluded that a fresh start is needed at the leadership of the FBI,” Sessions said.

In his letter to the director, Trump said Comey’s dismissal was necessary to regain the public trust.

“It is essential that we find new leadership for the FBI that restores public trust and confidence in its vital law enforcement mission,” Trump said.

Comey was three years into a 10-year term.