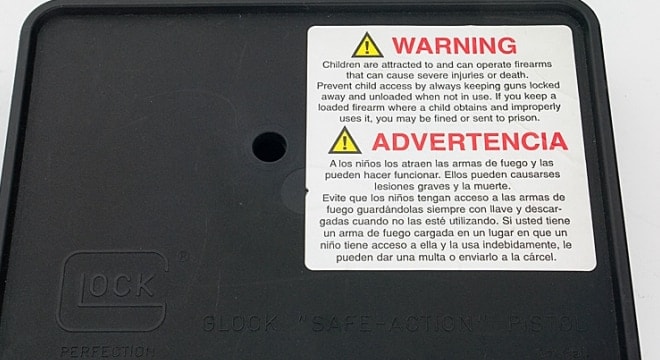 A measure requiring an update in the warnings on guns sold in the state was approved Wednesday by the Assembly Appropriations committee.

The proposal, AB 1525, which would change the current warning on the packaging of firearms as well as signs for display in gun stores, passed the committee 12-5 this week.

Sponsored by Assemblywoman Catharine Baker, R-San Romon, the move would dip into the state’s Firearms Safety Account to the tune of $70,000 to print 1.3 million new warning labels to direct those buying a gun to the website of the California Attorney General for information on complying with new firearms laws.

“We need to have these signs changed, they are not fully in compliance with current law and we need to do it in a way that is smarter for the future so that we don’t have to do it over and over again,” said Baker in front of the committee before the easy vote, advancing, as noted by committee chair Lorena Gonzalez Fletcher. “Because all the Dems had your back.”

California has required warnings on firearms certificates and instructional pamphlets since 1993. Current law mandates packaging of any firearm to carry a statement warning that children are attracted to and can operate firearms and that if a child obtains and uses one, the owner could be subject to fines and imprisonment.

The bill is backed by the California Chapters of the Brady Campaign to Prevent Gun Violence who thinks gun owners should have fair warning of their responsibilities under the state’s ever-shifting firearms laws. In its original form, the measure would have mandated that the text, “The presence of a firearm in the home can significantly increase the risk of suicide, homicide, and unintentional shootings for household members” be added to the warning, though this was later stripped away in committee after objections by gun rights groups.

Craig DeLuz, speaking for the Firearms Policy Coalition, argued the measure requires more hoops for gun stores and consumers to jump through without providing a benefit to the public.

“Our major concern is the need for the additional signage,” said DeLuz, pointing out that adding the Attorney General’s website address to the current warnings is insufficient as information about the most recent laws passed last year is not there and “they do not exist there.”

DeLuz also stated the estimated costs to implement the bill were “severely underestimated” and the additional expenditure would not solve any public safety issue.