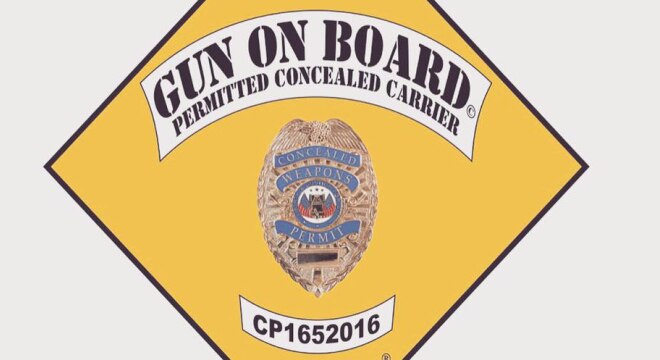 “Carrier Shield” is a $79-99 sticker program that goes on the back windshield or bumper, which aims to inform any police officers there is a firearm in the vehicle and is getting a mixed reception. (Photo: Carrier Guard)

A Boynton Beach construction worker has founded a company that hopes to sell scannable stickers that carry permit holders can put on their vehicle to help police.

Dolkens Bruno started Carrier Shield following the fatal officer-involved shooting of Minnesota concealed carry holder Philando Castile at a traffic stop last year. Bruno’s program is designed with the intention of giving officers a quick way to note that there may be a legally armed permit holder in the vehicle before an interaction starts.

“The sticker is basically going to prevent people from reaching because it’s going to have a bar code in there where the police are going to have a device that they’re going to scan it, and all of your information will appear on his laptop,” Bruno, a concealed carrier himself, told WPBF.

However, law enforcement officials are not impressed with the concept.

“Knowing there’s a gun in the vehicle – that’s not going to make me relax,” Eric Davis, a spokesman for the Palm Beach County Sheriff’s Office, told the Sun Sentinel. “What will make me relax is having the subject comply with my directions.”

“All we ask is the two Cs … comply and, if you need to, complain,” Davis said. “If you feel your treatment is unjust, you have recourse through the legal system.”

Bruno hopes to sell annual subscriptions to the program for $79 to $99, which approaches the total cost of Florida’s permits themselves.