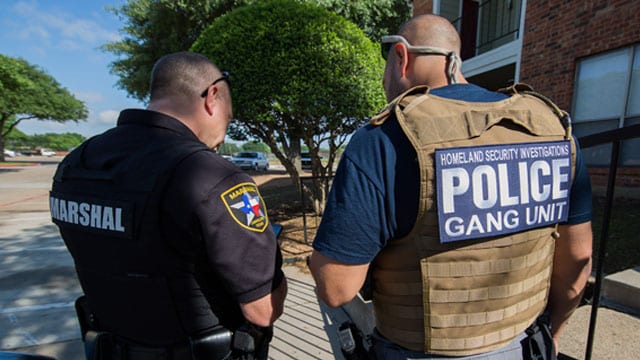 Law enforcement from state, local and federal agencies helped in the Homeland Security Investigations operation, which happened from March 26 to May 6. (Photo: ICE)

Federal immigration authorities on Thursday announced the arrest of more than 1,300 people as part of a six week, nationwide operation targeting gang members.

The Homeland Security Investigations arm of the U.S. Immigration and Customs Enforcement agency led the operation, which targeted gang members involved in transnational crime, according to a news release. It was the largest such surge conducted by HSI to date.

During the operation, 238 firearms were seized, as were hundreds of pounds of drugs and nearly half a million dollars.

The efforts took place all over the country, but the most activity happened in Houston, New York, Atlanta and Newark.

Three of the nearly 1,400 people incarcerated during the operation had previously been granted Deferred Action for Childhood Arrival status – a program that defers deportation and grants a work permit for undocumented immigrants who came to the U.S. at a young age. DACA recipients who “pose a threat to national security or public safety” can have their status terminated and be deported. Since the program began in 2012, the Department of Homeland Security has terminated deferred action status for 1,500 people for criminal or gang affiliation reasons.

The six week crackdown announced Thursday was part of Operation Community Shield, an ongoing effort by ICE that started in 2005 and has seen more than 47,000 gang-related arrests.

The effort comes as Attorney General Jeff Sessions and the Justice Department, at the behest of President Donald Trump’s Jan. 25 executive order, is cracking down on undocumented criminal immigrants, has opened new offices, threatened gangs with justice, and has tried to force sanctuary cities to cooperate with immigration efforts – beefing up data collection to name and shame jurisdictions that decline federal detainer requests.