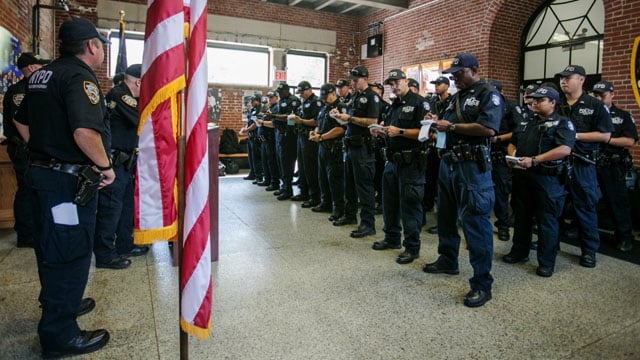 Officers with the NYPD Counterterrorism Bureau at their headquarters on Randall’s Island in 2016. (Photo: Benjamin Chasteen/Epoch Times)

The New York Senate passed a bill this week that would make crimes committed against police and firefighters hate crimes.

Of the 135 police officers who died in the line of duty nationwide last year, 64 of them were shot and killed. Of those, 21 were ambushed — the highest number in twenty years, according to data compiled by the National Law Enforcement Officers Memorial Fund. Those numbers are evidence enough for the bill’s sponsor to take action.

“The passage of stiffer penalties will not single-handedly protect all of our emergency service workers but we must make it clear that targeted offenses against our Community Heroes will not be taken lightly,” said Sen. Fred Akshar. “We will not be silent while you are selfless.”

The offenses are hate crimes only if they’re intentionally carried out against first responders because of their career. “This law will see to it that such an offender receives a punishment that fits this heinous crime,” said Sen. Martin Golden, a former New York City police officer.

Earlier this year, a bill was filed in Ohio that would make killing first responders a death penalty eligible crime. It was assigned to the House Judiciary Committee on Feb. 10.