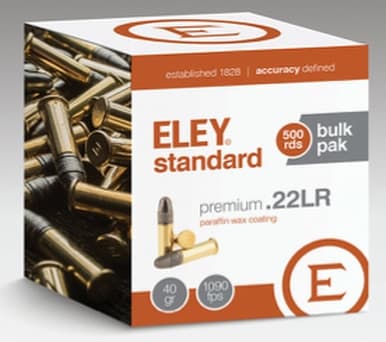 The standard .22LR will be available in a bulk pack priced under $50. (Photo: Eley)

Ammo maker Eley relaunched its standard .22LR ammunition line aimed at rimfire shooters looking to save some bucks while plinking.

The standard is a 40 grain, round-nose bullet, with an average velocity of 1,090 feet-per-second. Though the standard is a reintroduction of an older series for the company, Eley upgraded the lineup adding a paraffin-wax lube to the bullet. According to the manufacturer, the lube adds consistency and reliability to the bullet.

Jamie Corkish, marketing manager for the company’s North American division, said in a press release that the launch of standard came as a response to an obvious void in the market for a reliable .22LR that doesn’t break the bank.

“Price conscious shooters deserve accurate and reliable .22LR as well,” Corkish said. “We decided to bring back a product we had many years ago, to allow shooters of all ages and levels to experience and trust Eley’s un-rivaled accuracy at an affordable price.”