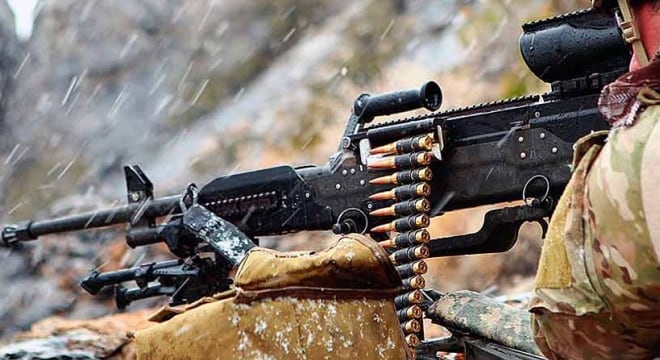 The LWMMG uses the .338 Norma Magnum cartridge to extend the battlespace for small unit machine guns out to an impressive 1,700 meters, eliminating the gap between 7.62mm and .50 caliber weapons. (Photo: General Dynamics)

The U.S. Special Operations Command, partnering with the Marine Corps, is looking for domestic sources for a .338 Norma Magnum caliber machine gun.

In a sources sought listing posted on May 11, SOCOM stated a need to fill an order for 5,000 Lightweight Medium Machineguns chambered in .338NM. The 300 grain belted magnum round is touted as having a recoil similar to a 7.62mm NATO round while still being lethal out past 1,700 meters. At 1,000 meters, the round is still capable of defeating Level III body armor and penetrating soft skinned vehicles, thus considered a bridge between the current 7.62mm offerings and .50 BMG.

The LWMMG specs include that it should be belt-fed, use polymer-cased .338 NM, weigh less than 24-pounds unloaded with a 24-inch barrel, and have a 500-600 round per minute rate of fire. The system, capable of using the standard mounts and M192 tripods designed for the M240 series general purpose machine gun, would include both a suppressed and unsuppressed barrel, capable of rapid changes between the two, as well as all accessories.

Defense contracting giant General Dynamics in 2012 debuted a 24-pound M240 style LWMMG that fired the .338NM and carries it in their catalog today.

The expansion into the .338NM caliber was preceded by a similar source’s statement last month by SOCOM for a convertible advanced sniper rifle system adaptable to fire the 7.62mm NATO, .300NM, and .338NM cartridges.