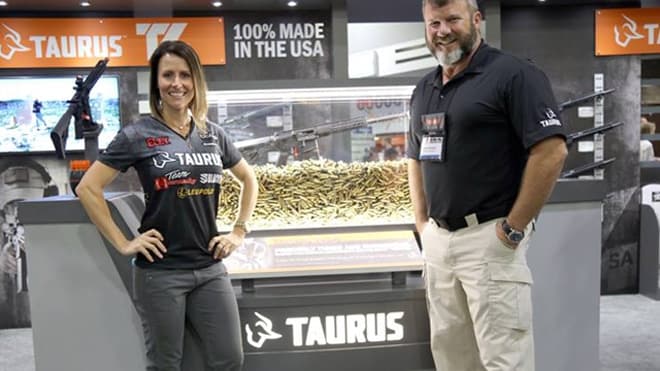 Taurus RI, the Brazilian manufacturer that owns gun maker Taurus USA, reported a bump in gun sales in the U.S. despite expectations for a market slowdown.

Taurus reported $53.5 million in U.S. sales, an increase of 23.6 percent from last year after converting the Brazilian real to U.S. dollar, according to last week’s filings with São Paulo regulators.

The company credited higher revenues to an increased production of weapons. Firearms made up 87 percent of Taurus’s business in the first quarter, helmets were a far second generating only 9 percent, and other manufactured goods in third with 4 percent. Exports to the U.S. jumped 16 percentage points, making up 77 percent of the company’s total exported goods.

Leading up to November’s election, gun makers and retailers in the U.S. prepared for a victory by Democratic presidential candidate Hillary Clinton, who advocated for gun control, a political idea that has been influential in selling guns. But demand slumped after Republicans took control of the White House and both chambers of Congress in November.

To move higher levels of inventory amid slow demand, Taurus along with other gun makers have “become quite promotional” in the short term, Taurus says. The U.S. background check system, used as a proxy measure for gun sales, shows gun sales following seasonal patterns but comparable results to last year. During Taurus’s first quarter, the system saw a 10.8 percent decline in checks.

U.S. sales have been stable for Taurus, increasing 9.5 percent from the $48.9 million the fourth quarter of last fiscal year.

In the past few months, Ruger also resorted to promotional efforts and repurchased 1.7 million shares of stock to produce results that would appease shareholders.

Yet, ammo maker Winchester Ammunition reported an 11.5 percent drop in earnings due to weak demand.