Trump vows to seek solution to violence against police 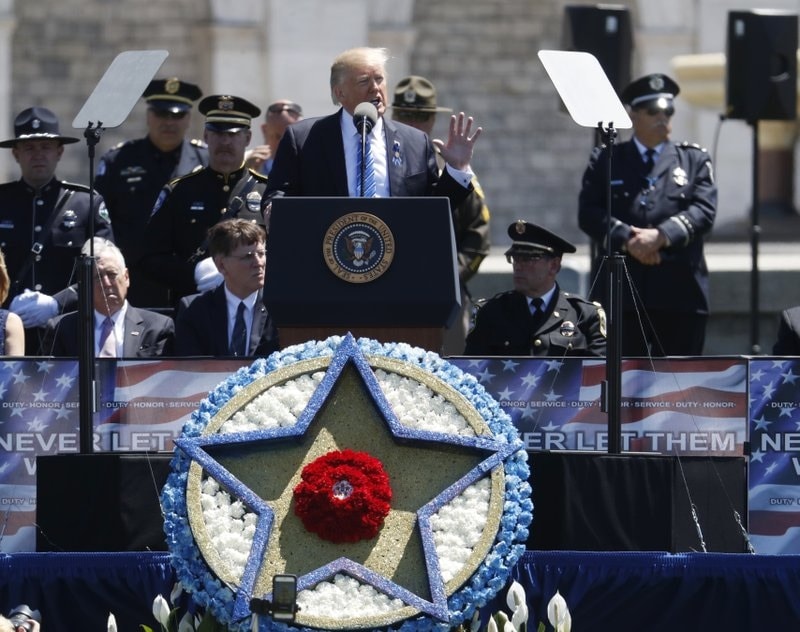 “Every drop of blood spilled from our heroes in blue is a wound inflicted upon the whole country,” Trump said. “And every heartache known by your families in law enforcement is a sorrow shared by the entire family of the American nation.”

This morning, Trump met with law enforcement families and others in the Oval Office, where he signed a proclamation marking Monday as Peace Officers Memorial Day and May 14 through May 20 as Police week.

“Police officers are the thin blue line whose sacrifices protect and serve us every day, and we pledge to support them as they risk their lives to safeguard ours,” the proclamation says.

The president said that last year 118 officers died in the line of duty, 66 of them victims of malicious attack.

According to the Officer Down Memorial Page, which tracks police deaths across the country, there were 145 line-of-duty deaths in the law enforcement community in 2016.

“This must end,” the president’s proclamation says. “That is why one of my first actions was to direct the Department of Justice to develop a strategy to better prevent and prosecute crimes of violence against our Federal, State, tribal, and local law enforcement officers.”

Attorney General Jeff Sessions on Friday directed the nation’s federal prosecutors to “charge and pursue the most serious, readily provable offense” in all criminal cases, not specifically as relates to attacks on law enforcement, which is a departure from the previous administration’s stance on the matter.