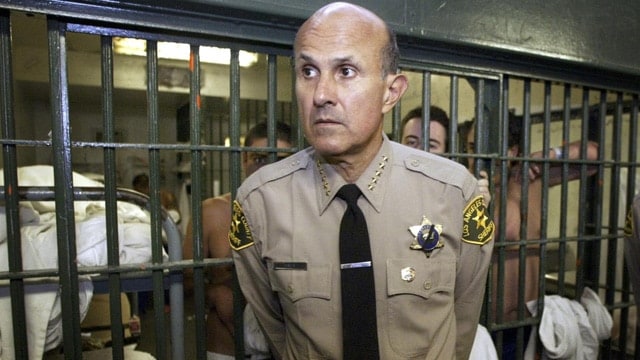 Baca, 74, was the 10th former member of the Los Angeles County Sheriff’s Department convicted as part of the obstruction scheme, according to the Department of Justice.

In August 2011, sheriff’s department officials discovered a cell phone in an inmate’s cell, linked it to the FBI, and learned the inmate was a federal informant. The discovery set off an obstruction conspiracy directed by Baca and his right-hand man, former Undersheriff Paul Tanaka.

“Baca ordered a criminal investigation of the FBI agents conducting an undercover investigation, and he directed that the informant be concealed from federal investigators,” says a Justice Department press release announcing Baca’s conviction earlier this year. “Members of the conspiracy then hid the informant from federal authorities, engaged in witness tampering in an effort to prevent information from being shared with federal authorities, and threatened to arrest the lead FBI agent on the case.”

When he watched a tape of his deputies confronting the FBI agent, he said it was “the best laugh he had in some time,” according to a sentencing memo filed by prosecutors.

While Baca put Tanaka in charge of the scheme, he still had a lead role — attending meetings and making phone calls over a six week period that successfully hid information from federal authorities. A top deputy warned Baca that such behavior was obstruction of justice, but it didn’t stop the former sheriff.

“(Baca) knew what he was doing was wrong, and he had no problem using his office to further his own agenda,” said United States District Judge Percy Anderson.

“Rather than fulfill his sworn duty to uphold the law and protect the public, Lee Baca made a decision to protect what he viewed as his empire, and then he took actions in an effort to simply protect himself,” said Acting United States Attorney Sandra R. Brown. “Today’s sentence demonstrates that no one is above the law – not even the leader of the largest municipal police agency in the nation.”

Serving as sheriff for 15 years, Baca commanded 18,000 employees and oversaw the same number of inmates in L.A. County’s seven jails. In March, a jury convicted the former sheriff on three felony counts: conspiracy to obstruct justice, obstruction of justice and making false statement to federal investigators.

Tanaka was sentenced last year to five years in prison. Judge Anderson said Baca would have received the same amount of time, but cited his medical condition and lengthy history of public service as reasons for the lesser sentence. Baca is in the early stages of Alzheimer’s disease.

He was ordered to begin serving his sentence by July 25. In addition to the three-year sentence, he was fined $7,500.