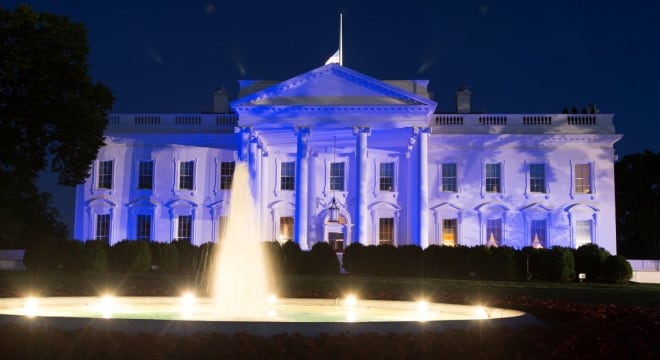 As Trump addressed the 36th annual National Peace Officers Memorial Service at the U.S. Capitol on Monday, members of the Law Enforcement Coalition for Common Sense rebuffed the chief executive as being soft on guns.

“We can keep guns out of the hands of dangerous people and better protect law enforcement from the threats of gun violence,” said David Chipman, a retired Bureau of Alcohol, Tobacco, Firearms and Explosives agent, now with the gun control group. “But to do that, we need a president who is serious about finding solutions that put the interests of law enforcement first, not the Washington gun lobby.”

Besides the speech at the Capitol, Trump later met with law enforcement families and others in the Oval Office, where he signed a proclamation marking Monday as Peace Officers Memorial Day and May 14 through May 20 as Police week.

“Police officers are the thin blue line whose sacrifices protect and serve us every day, and we pledge to support them as they risk their lives to safeguard ours,” the proclamation says.

“The president is right to acknowledge the many sacrifices that our brave men and women in law enforcement make for our country,” said Chipman. “But these heroes deserve more than lip service and empty promises, they deserve a president who will listen to law enforcement, protect our communities and reject the gun lobby’s extreme agenda.”