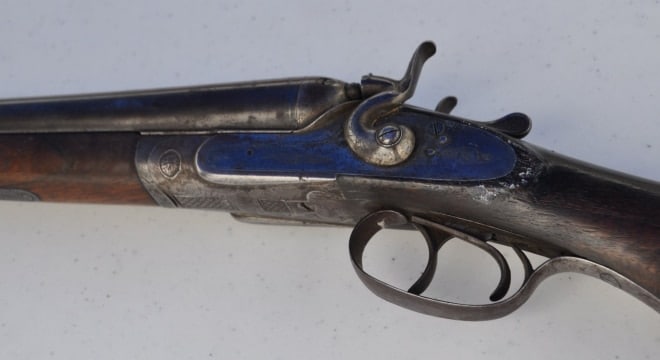 The SXS German-made double, likely a black powder gun made with Damascus steel, dates from 1892 and is thought to be worth four figures. (Photo: Jon Anderson/Hoover Sun)

An 84-year-old man was able to recover a 19th Century German shotgun that he dropped off to be disposed of after city officials pointed out it was likely valuable.

The Hoover Sun reported that the North Alabama city of Hoover had a pretty good haul at an annual event designed to get rid of household hazardous waste such as old paint, pesticides, batteries and questionable cleaning products, with some 1,400 area residents dropping off items on April 19. There was, however, a little bit of boom dropped off to include a .22 revolver, a pellet gun, 50-75 pounds worth of ammo (mostly oxidized shotgun shells), some fireworks and an old shotgun.

Like 1892 made in Imperial Germany back when they had a Kaiser old. The owner, who had the shotgun in his family for generations, had been told it was unshootable after trying to get ammunition for it at local gun shops and had decided to get rid of it.

While city officials at first said they were going to melt the old double down, Hoover Councilman Gene Smith, a local gun shop owner, estimated the antique 16-gauge was “probably worth at least several thousand dollars and maybe as much as $10,000” and it was decided to save it from the scrap heap.

“For the age, this gun is in amazing condition,” Smith said. “It’s in extremely good shape. In fact, anything you’d do to try to restore it would actually bring its value down. It’s most valuable just as it sits right now.”

Upon finding out the gun’s value after news of the turn-in began to circulate, the former owner decided he was better off reclaiming the Teutonic scattergun and his daughter picked it up from the Hoover Municipal Center last week. While Alabama law governs how firearms turned to police are handled, the shotgun, made by a small Jewish custom gunsmith, predated the 1898 dividing line between antique and modern, making it exempt from gun transfer mandates.