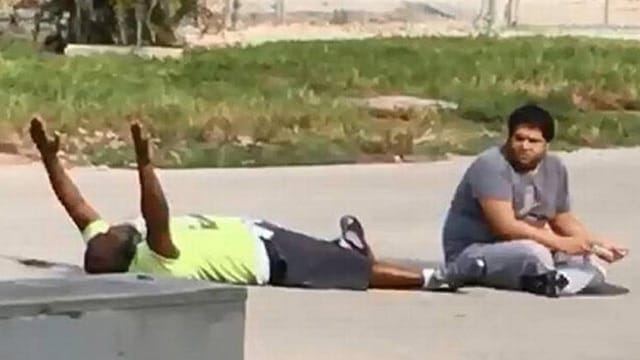 Charles Kinsey, left, lies on the ground next to Arnaldo Rios moments before he was shot in the thigh on July 18, 2016. (Photo: YouTube)

Prosecutors in Florida added more charges on Friday for a police officer who shot an unarmed man who was lying on the ground with his hands in the air.

The charges stem from a July 18 incident in which Charles Kinsey, a behavioral therapist, was lying on the ground next to Arnaldo Rios, an autistic man who was sitting in the middle of the road after wandering from the Miami Achievement Center for the Developmentally Disabled.

In a call to 911, someone said a “possibly suicidal” man was sitting in the road holding a handgun. A bystander recorded cell phone video as Kinsey told Rios to lay down on his stomach. He refused, and instead yelled at Kinsey, who tried to explain to police that Rios was holding a toy truck.

Kinsey was hit in the thigh and survived. Aledda was originally charged with one felony count of  attempted manslaughter and one misdemeanor count of culpable negligence for the shooting of Kinsey. Charges on Friday added one count each for Rios. He was not hit, but shots fired in his direction “could have resulted in death,” according to the charges.

“We’re constantly analyzing the law and looking at the facts, and as a result, we realized these are the appropriate charges,” said Miami-Dade State Attorney Katherine Fernandez Rundle.

It’s the first time an officer in Miami-Dade County has faced charges for an on-duty shooting since 1989. Aledda maintains his innocence.