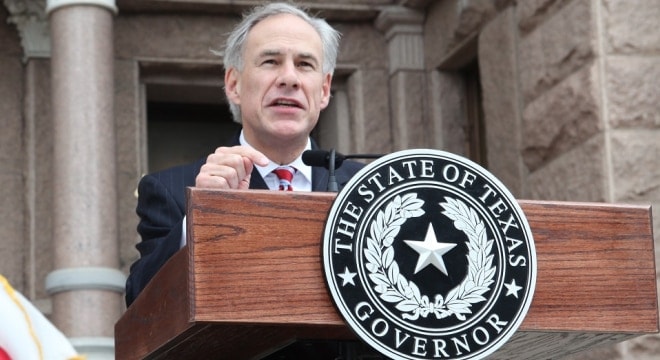 A bill to reduce handgun license fee in Texas is now in the hands of Gov. Greg Abbott (Photo: Texas Governor’s office)

The legislature put the finishing touches on a popular measure greatly reducing the license to carry fee in the Lone Star State.

The measure was backed by Lt. Gov. Dan Patrick as a legislative priority this session, and he welcomed news of its final passage, arguing it was a win for both the Second Amendment and taxpayers.

“No Texan should be deprived of their right to self-protection because of onerous licensing fees imposed by the state,” Patrick said in a video message. “Senate Bill 16 will make lawful carry more affordable for law-abiding citizens across the state — taking Texas from being one of the highest fee states in the country to now one of the lowest.”

While active duty military and prosecuting attorneys in the state can obtain a free permit, and retired law enforcement, military veterans, judges and senior citizens pay discounted rates, the typical initial fee for a license to carry a handgun in the state is $140. Besides the reduction to $40, House lawmakers amended the proposal to further waive fees for law enforcement.

As of the end of 2016, there were 1.2 million active license holders in the state according to statistics from the Texas Department of Public Safety.  Although a fiscal note from the Legislative Budget Board estimated the state would lose $22.3 million in revenue due to the license fee reductions through 2019, the $40 price of would still more than cover the program cost as DPS reported the expenditure to administer the program is only $27 per applicant to pay for background checks conducted by the Federal Bureau of Investigation and the state.

The measure’s passage comes as a pair of constitutional carry bills in the House floundered in the final days of this year’s session, kicking the idea of not of paying for a permit to carry in the state down the road until the 86th Texas legislature convenes in 2019.

The bill was sent to Republican Gov. Greg Abbott on Monday for review. If approved, the reduction would take effect on September 1.