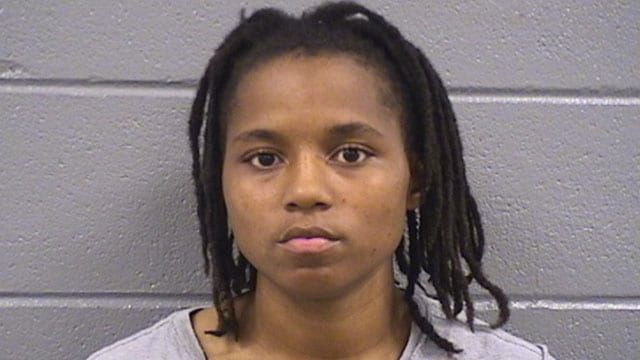 Deangela Eaton engaged in a shootout with two Chicago cops who witnessed an alleged drug deal between Eaton and another individual. (Photo: Cook County Department of Corrections)

A 25-year-old woman who engaged in a shootout Friday afternoon with two Chicago police officers was charged Monday as she remains in the hospital recovering from multiple gunshot wounds.

Deangela Eaton was charged with attempted first-degree murder, aggravated battery with discharge of a firearm, aggravated assault of a peace officer with a weapon, and aggravated unlawful use of a weapon.

On Monday, Cook County Judge Maria Kuriakos-Ciesil continued Eaton’s case until May 22, citing her physical incapacity. Once released, Eaton will be transferred to the Cook County Department of Corrections where bond has already been denied.

According to a news release from the Chicago Police Department, the incident unfolded around 2:30 p.m. when two officers on patrol witnessed what was described as “suspicious activity, possibly a drug transaction, between a male and a female.”

The officers pulled up to speak with the individuals, and at that time, the male subject fled on foot. The female, later identified as Eaton, pulled a handgun and fired at the officers, who returned fire.

Authorities confirmed a handgun was recovered from the scene, but it’s unknown if evidence of a drug deal was also found.

Eaton was struck multiple times in the shoulder, leg and abdomen. She was transported to the hospital where she was originally listed in critical condition, but her current condition is unknown.

The male subject who fled as the officers approached was not found and remains at large.

The officers involved in the incident have been placed on administrative leave, as is standard protocol in officer-involved shootings. The incident remains under investigation by the Independent Police Review Authority and will include a comprehensive use-of-force investigation.

The shootout occurred 10 days after two Chicago plainclothes officers were ambushed while sitting in a van on the city’s southwest side.

“It’s a miracle the officers are still alive,” Chicago Police Department spokesman Anthony Guglielmi said of the officers, both of whom were struck by gunfire but survived.