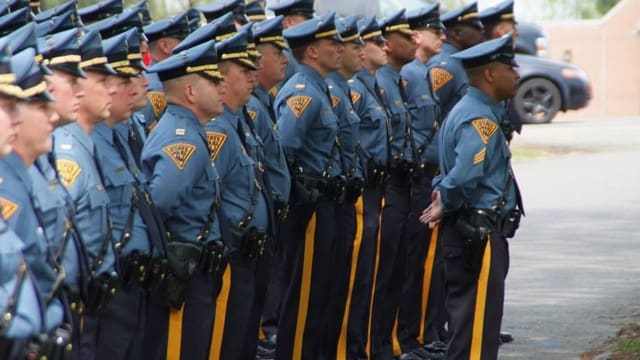 Troopers of the New Jersey State Police in formation in May 2014. (Photo: NJSP/Facebook)

Sig Sauer, one of the largest firearm contractors in the world, has been named in a $2.5 million lawsuit alleging the New Hampshire gun maker sold the New Jersey State Police defective duty pistols and then failed to rectify the problem.

Represented by  New Jersey’s attorney general, the lawsuit argues Sig breached a contract to supply 3,000 handguns to State Police, but “the weapons had a serious malfunction” that was not adequately fixed.

According to the complaint filed in late April, obtained by The Trace, the gun maker filled the contract in September 2014, but when Troopers used the new P229 pistols during a qualification session, they experienced “Failure to Extract” malfunctions. This type of malfunction means “the weapons failed to eject the spent shell casing from the barrel after being fired, causing the next cartridge to become jammed behind the casing, and resulting in an inability to continue firing the weapon.”

“An FTE malfunction renders the gun unfit for police use because a Trooper may be unable to fire more than one round of ammunition in a life-threatening situation,” the lawsuit says.

For 16 months after initially experiencing the malfunction, Sig tried on multiple occasions to remedy the problem by replacing specific components and ultimately supplying a new set of weapons, the lawsuit says. But “each of Sig Sauer’s numerous proposed ‘fixes’ had proved ineffective” and the State Police opted to select a new contractor.

According to the complaint, immediately following the initial issue, State Police officials notified Sig, which suggested the extractor pins in the P229s may be causing the malfunctions, so the gun maker began replacing the component in some of the troubled pistols. Later, Sig suggested the factory mold may be responsible for the issue, but after inspecting some samples concluded a misapplication of the coating on the barrels caused the problem, so the company shipped a supply of new barrels for the defective pistols.

But the FTE malfunctions continued for the better part of a year. Then on July 6, 2015, after another firearms qualifications course, Sig representatives once again diagnosed the problem, but this time attributed the issues to the extractor springs, which are designed to force empty casings out of the barrel. Sig shipped 250 replacement springs.

A few months later, in October 2015, when Sig had to address the problem again, company reps told State Police officials they would send extractor springs for a different model to correct the problem. However, by the end of the month, State Police officials questioned how different their handguns, Sig’s model P229 Enhanced Elite, were from the P229 Legacy handguns they had originally tested. While the guns were similar, they used different extractor systems, so the officials suspected that might be the cause of the problem.

A few days later, Sig agreed to replace the Enhanced Elites with the Legacy variant by the end of January 2016. But the gun maker failed to keep to the timeline and said it could only deliver half of the order by deadline. When State Police recruits tested the new guns, both State Police officials and Sig reps witnessed the FTEs and the training class was forced to stop using the gun.

In response, State Police officials and Sig reps tested 25 of the Legacy handguns selected at random from the department’s inventory. Sig gunsmiths immediately “red-lined” five of the guns “because they were so egregiously noncompliant with Sig Sauer’s specifications that they could no longer be used.” Then, State Police officials selected five at random to test fire and three of them exhibited numerous FTE malfunctions, the lawsuit says. The remainder of the testing session was then canceled.

By Jan. 27, 2016, Sig advised State Police officials had completed testing and determined the barrel was causing the problems, but by that time it didn’t matter. The State Police declined discussing the issue further and returned the handguns to Sig by Feb. 1, 2016. Later, the department awarded the contract to Glock.

The lawsuit says State Police suffered damages including $1.7 million for the guns, $856,680 for accompanying holsters and reimbursement of unspecified costs for testing and evaluating the guns.