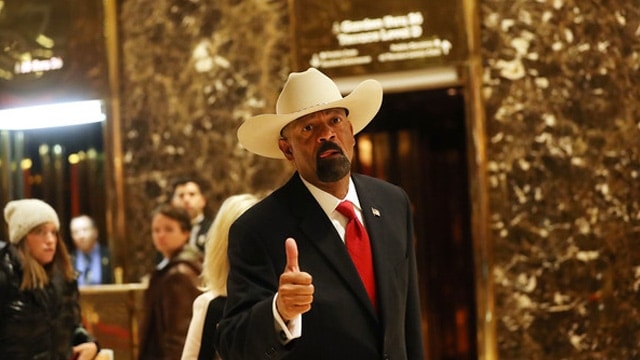 Milwaukee Sheriff David Clarke before his meeting with then President-elect Trump in Trump Tower.

Milwaukee Sheriff David Clarke, a conservative speaker known for divisive commentary, said Wednesday he has accepted a federal appointment for assistant secretary in the U.S. Department of Homeland Security.

Clarke made the announcement on a conservative radio show in Milwaukee, saying “I’m looking forward to joining that team.”

He said he would be serving in DHS’s Office of Partnership and Engagement. In that position, he will act on behalf of Secretary John Kelly and serve as a liaison for the federal department connecting with local and state law enforcement agencies, according to DHS’s website.

Clarke has been gaining popularity among conservative groups, including the National Rifle Association, for the past five years. He also became an early supporter and surrogate for Donald Trump during his campaign for president. Early in the Trump Administration, Clarke had been tapped for a higher position in DHS.

Homeland Security has yet to confirm the appointment, only saying “senior positions are announced when made official by the secretary. No such announcement with regard to the Office of Public Engagement has been made.”

Clarke will leave his local position amid controversy. Nearly three weeks ago, seven staffers of Milwaukee County jail were charged in the death of an inmate who died of dehydration. They’re accused of denying the inmate water for several days. While Clarke was not charged, the incident happened under his leadership.

Clarke began gaining national popularity in 2013, when he launched a public service announcement advocating armed self-defense as a solution to a reduction in the police force — which also served as a political jab to Milwaukee’s mayor and police chief.

Clarke has served as sheriff for four terms and started in law enforcement in 1978. He said he would start the federal position next month. To replace Clarke, Wisconsin Gov. Scott Walker will be expected to appoint a successor.