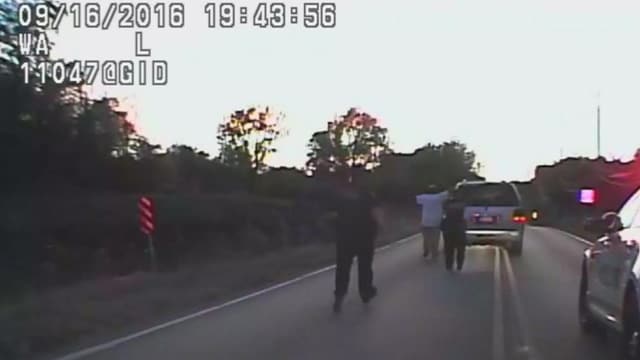 A portion of the deadly encounter was captured on both dash cam footage and video from a police helicopter hovering above. (Photo: Tulsa Police Department)

After deliberating for more than eight hours Wednesday, jurors acquitted Tulsa Police Officer Betty Jo Shelby of first-degree manslaughter, a charge connected to the shooting death of an unarmed motorist last year that many believed to be predicated on racial bias rather than immediate danger.

The court asked jurors to decide whether Shelby acted in a manner that was inexcusable or unjustified, or whether the motorist, Terence Crutcher, died as a result of his own actions. The case fueled tensions over race relations, as Shelby is white and Crutcher was black. However, Shelby has maintained that she acted out of fear surrounding the totality of the circumstances and that race was not a factor or otherwise contributed to her decision to pull the trigger.

Crutcher’s family was understandably upset over the verdict. His father, Rev. Joey Crutcher, said he thinks Shelby “got away with murder.”

During deliberations, the defense team requested a mistrial, but the judge overruled the request. About two hours before deliberations ended, jurors also asked if they could explain their decision, but their request was denied.

The deadly encounter occurred on Sept. 16, 2016. Shelby was the first of several officers who responded to the call about an abandoned SUV in the middle of the road. As Shelby approached the scene, she found Crutcher wandering around near the vehicle, rambling incoherently and placing his hands in his pockets, despite numerous warnings not to do so.

Shelby, who is trained as a Drug Recognition Expert, previously said her initial impression was that Crutcher was under the influence of what she suspected to be PCP. Shelby described Crutcher as being “zombie-like” during their encounter. And although Crutcher, who stood over six-feet tall and was well over 200 pounds, was not showing signs of aggression, Shelby said she knew the dangers of encountering an individual under the influence of PCP. Those dangers include sudden mood swings, anger, violence, hallucinations, and increased, almost super-human like strength.

Dash cam footage, as well as video taken from a police helicopter overhead, show Crutcher walking toward his SUV with his back to the officers and his hands in the air. But as Crutcher neared his vehicle, Shelby said his hands went down to his sides, and that’s when, she claimed, she feared he was going to reach into his vehicle to retrieve a weapon. She shot Crutcher, simultaneously as another officer deployed his Taser.

No weapon was recovered from either Crutcher’s person or his vehicle. However, PCP was found inside the SUV and – just as Shelby had suspected – an autopsy revealed Crutcher was high on two hallucinogenic drugs at the time of the encounter, including PCP.

Shelby was originally placed on paid administrative leave, but her status was later changed to unpaid leave. Just days after the fatal shooting, Shelby was charged with first-degree manslaughter, for which she would have spent a minimum of four years in prison if found guilty. Her trial lasted one week.

Protesters took to the streets late Wednesday as word spread of Shelby’s acquittal, but as of just before midnight, protests had remained peaceful. Tulsa city officials plan to host a press conference Thursday morning.