The quest for the perfect, all-in-one, homebrew shotgun slug load 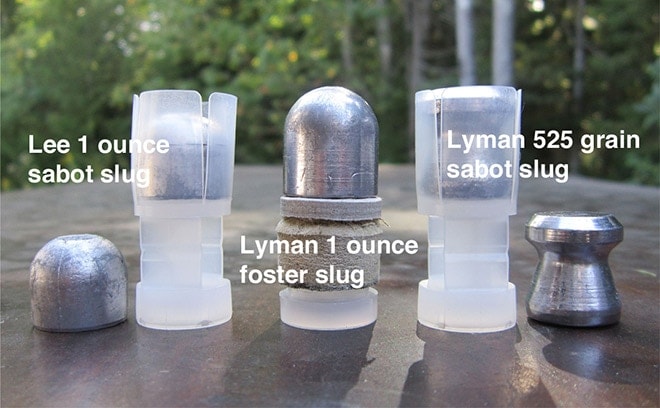 Over the past decade I’ve grown somewhat obsessed with shotguns, especially when they’re loaded up with slugs. Part of the reason is simple economics. I’m broke and a basic, synthetic stocked pump action shotgun can be obtained for less than $400 new. Another part of the equation is the raw, unbridled, power that a smoothbore slug gun can unleash. It fits perfectly with my personal style — ragged and imprecise, but nonetheless powerful.

In a sense, a slug gun is to the firearms world what punk rock is to music. If a finely tuned, bench rest competition rifle is the New York Philharmonic at Carnegie Hall, a slug chucker is Iggy and the Stooges at a Detroit Dive Bar circa 1970. It’s simply a hell of a lot of fun to blast enormous holes in things with big heavy chunks of lead without the expectation of having to print neat little groups on tiny targets at 200+ yards.

One downside of my penchant for slugs is that it conflicts somewhat with my penchant for handloading. Metallic cartridge loaders generally have a wide variety of components to choose from, many of which being interchangeable and access to volumes of data. Unless a person is grossly inept or careless, with a little experience anyone can assemble at least marginally accurate brass ammunition.

Life is a little trickier for the slug handloader. Compared to rifle and pistol bullets, the existing selection of shotgun slugs for handloading is minuscule, substitution of components such as hulls, primers, wads, and gas seals can cause disastrous pressure spikes, and the amount of load data available is a tad sparse. Additionally, shotguns tend to be finicky about what combinations of components will yield reasonable accuracy. While I have no expectation of laser-like precision from a smooth bore gun, I do want slugs that will at the very least produce 50 yard groups that are minute of deer.

Over the past years, I’ve launched something of a public service project to put a variety of home brewed 12 gauge slug loads through the wringer and test them for both accuracy and (in a fun but thoroughly unscientific way) terminal performance.

During the course of this project, accuracy tests consisted of a five shot group at 50 yards off the bench using a Benelli Nova Tactical with an 18 inch barrel and a ghost ring sight. I know that a better accuracy test would involve firing 10 five shot groups and then determining the average group size and obtaining a variety of other related figures requiring a calculus degree. That process, however, would suck all the fun right out of the endeavor and would blow what little budget I have in an afternoon. It would also effectively turn my shoulder to hamburger. Firing 12 gauge slugs from a bench can be exhausting. Consider the accuracy tests to be pass or fail. If all five slugs stay inside an 8 inch circle at 50 yards, I’ll call it good. 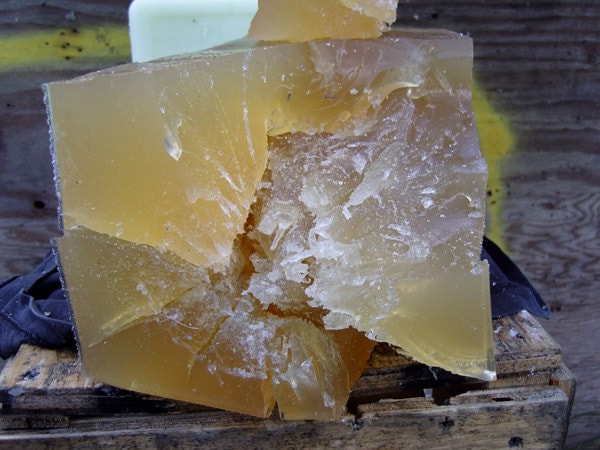 I opted not to use gelatin blocks for the terminal performance test portion of the project. I know from past experimentation that 12 gauge slugs obliterate a large amount of gel, and that stuff isn’t cheap. Instead, tests will be conducted using 6 inches of reusable ballistic wax (which is just paraffin wax softened by mixing in petroleum jelly) backed by a polyester bullet arrestor box (which is just a bunch of bags of fiber fill packed into a cardboard box). The wax will yield a record of the cavity created by a slug (the widest part of which generally occurs within the first few inches of material) and the polyester will act to stop the projectile.

I refused to endanger my chronograph by running slugs (and all the sabots, wadding, and gas seals that accompany them) through it, so all velocity figures will be my best estimate based on load data.

For the sake of establishing a baseline, I fired a basic 1 ounce Remington rifled Slugger with a hull length of 2.75 inches into the setup to see how the tried and true factory round would perform when it hit my test setup. The projectile punched through all six inches of wax and an additional inch and a half of fiber fill before coming to a halt. The maximum cavity diameter was greater than 1 inch and the slug flattened into a lead disk measuring just under 1 inch in diameter. 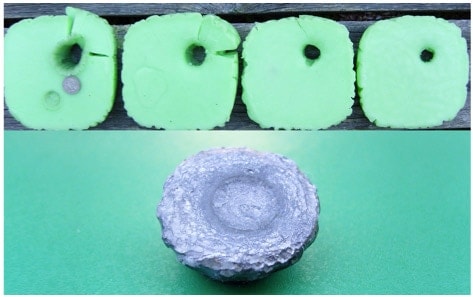 The top image shows the size of the cavity the Slugger created in the wax blocks which amounted to 6 inches of material. The block at left was the first encountered by the slug. The slug then penetrated an additional 1.5 inches of fiber fill. The bottom image shows the recovered slugger which expanded to a diameter of .9 inches. (Photo: Jason Wimbiscus)

With a point of reference established, I commenced testing my handloads, starting with the cheapest.

These 1 ounce slugs were cast at home from a mold manufactured by Lee.  They are approximately .690” in diameter, and designed to fit inside a standard trap wad and hull (like the Slugger, also 2-3/4 inches in length). Rounds incorporating these slugs can be assembled for pennies a piece if pre-fired hulls are used. A spoke running through the center of the slug locks into the wad upon firing which allows the slug and wad to turn in a rifled barrel as a single unit. While the slugs are intended for use in a rifled barrel, they are still essentially Foster slugs (hollow base, nose heavy) and I reasoned they would fly more or less true out of a smooth bore gun. 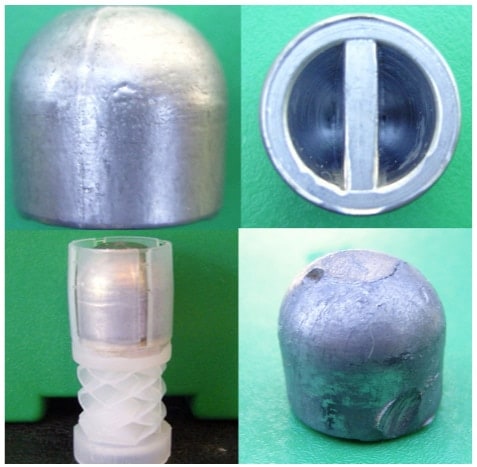 Clockwise from top left is the unfired Lee slug, a view of the slug’s base, the recovered slug, and the slug in a trap wad. The spoke running through the center of the slug allows it to lock into the wad. (Photo: Jason Wimbiscus)

The load I worked up for the Lee slug yielded an estimated 1200 f/s using a small charge of Alliant Green Dot. As a result, recoil was mild, feeling similar to that of an average trap load. In spite of its low velocity – or perhaps because of it – the slug offered far more penetration than I anticipated. The projectile zipped right through all 6 inches of wax, a whole foot of densely packed fiber fill, skimmed the ground behind the setup for a few feet, bounced once, and finally stopped after another ten feet of travel.

The Lee slug poked a neat hole through all 6 inches of wax, the entire arrestor box, and kept going. There was no expansion whatsoever. (Photo: Jason Wimbiscus)

I learned two things from this test. First, while fiber fill is amazingly efficient at stopping an expanded projectile, it sucks at stopping a solid projectile. Second, birdshot alloy (which is what I used to cast the slugs) really holds up when velocity is kept low. With the exception of a few minor dents and dings, the slug was no worse for wear after clearing my test box plus a few feet of rocky dirt. 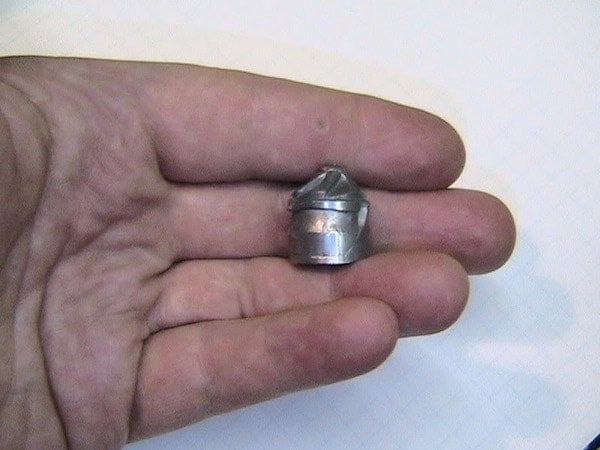 Lee cast slug after firing looks not much worse for wear when kept at a low velocity at least. (Photo: Jason Wimbiscus)

As is fairly typical of non-expanding slugs, the cavity left in the wax was essentially a straight tunnel of the same diameter as the projectile. There was no evidence of key-holing or tumbling in the test material which proved my theory correct that the slugs fly nose first, even out of a smooth bore.

While it’s hard to predict exactly how well Lee slugs would perform on medium sized game such as deer, I personally would feel better with something that expands at least a little — just a personal preference.  Even if I opt not to use these for hunting, the inexpensive, home cast slugs could still fill a roll in the form of plinking ammunition. That is, if I can get them to stay on target. And therein lies the rub. 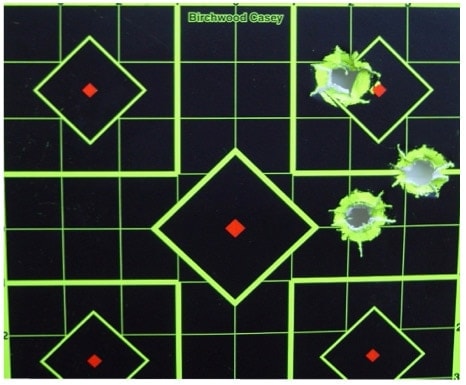 Three hits out of five at 50 yards is close to unacceptable. (Photo: Jason Wimbiscus)

The three shot group pictured above wouldn’t be too bad—that is, if it were a three shot group. While three of five shots stayed within 3.5 inches of each other, two others went wild and landed seven inches to the left making for a group a shade over ten inches in diameter.  Even by my admittedly lax accuracy standards, that’s less than ideal.

Still, all is not lost. The above performance was the result of only one hull, wad, and powder combination. I’ll be trying other loads incorporating these slugs in the coming months in hopes of tightening things up a little. Even if I can’t obtain a reasonable 50 yard group with these slugs, I imagine they’ll still facilitate cheap and fun way to blow up water jugs at 25 yards or less.