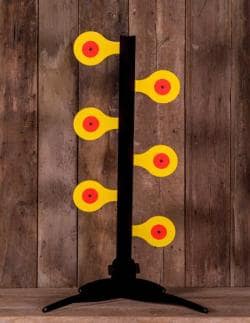 The AR500 Dueling Tree begs shooters to test their skills on the range. (Photo: Birchwood Casey via Outdoor Wire)

Bring a friend and duel it out or go it alone. The Dueling Tree’s plates swing side-to-side when hit, offering instant feedback and constant shooting action.

The tree’s canted stand sits on four stable legs and its lack of springs or mechanisms means it’s almost maintenance free. Easy to assemble, the stand requires no tools. The setup ships with a hard, molded case for easier transportation to and from the range.

Made in the US, Birchwood Casey’s AR500 Dueling Tree target is priced at just under $400.