Nighthawk Custom teams up with gun outfitters for Gunbroker auction 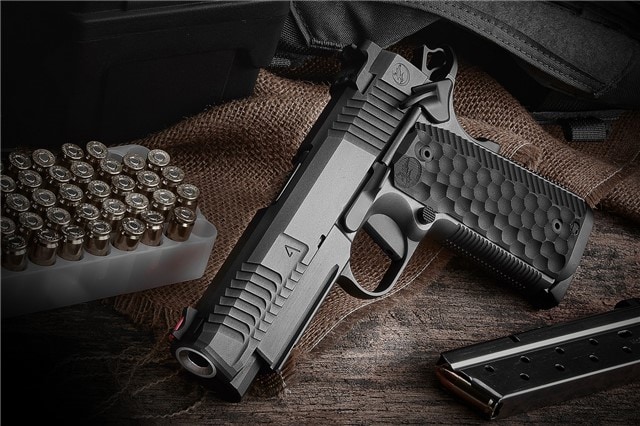 The Nighthawk Agent 1 auction sees several companies team up for a good cause. (Photo: Gunbroker.com)

Nighthawk, Agency Arms, Railscales, Cerakote and Hillybilly 223 team up to offer a custom Nighthawk Agent 1 for charity on Gunbroker.com

The meticulously crafted Nighthawk Agent 1 utilizes the “one gun, one gunsmith” approach, taking the 1911 platform to the next level, according to the collaborators.

“This specific pistol was designed to push the boundaries of what was possible with the 1911, while ensuring that the aggressive design maintained a practical application,” the press release said. “The resulting pistol speaks for itself. The Agent 1 is a truly unique and stunning firearm.”

The pistol to be auctioned is serial number one, NHAA-001, in a limited run of only 50 pistols. The forged commander size frame and 4.25-inch barreled gun features Agency Arms front and rear cocking serrations. Chambered in 9mm, the Nighthawk Agent 1 boasts a flat-faced Nighthawk Custom trigger and Nighthawk fiber optic front sight. Equipped with Railscale G10 grips, the gun is finished in Cerakote Battle Worn by Hillbilly223.

Starting bid is set for $4,500 but Nighthawk says they hope to raise as much money as possible for SOFC.