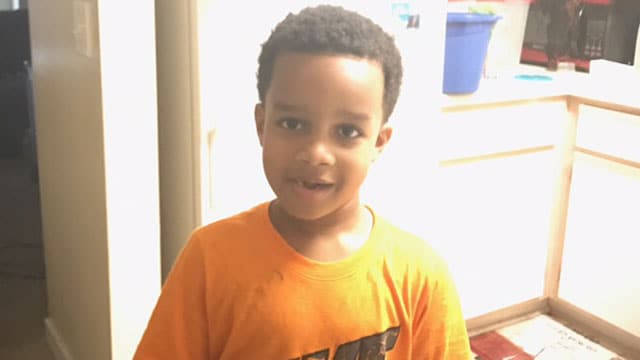 Kingston Frazier, 6, was described by family members as a little boy who just liked to have fun. (Photo: Mississippi Department of Public Safety)

The body of a missing 6-year-old boy was found Thursday morning in the back seat of a vehicle where he had been sleeping hours prior when the car was stolen from a Kroger grocery store parking lot in Jackson, Mississippi.

Authorities said the boy died from at least one gunshot wound, and three suspects, all teenagers, are in police custody.

According to reports, the boy’s mother, Ebony Archie, stopped at the grocery store around 1:30 a.m. and quickly ran inside to grab a few items as she left her 6-year-old son, Kingston Frazier, asleep in the back seat of her Toyota Camry with the engine running. Archie said she was in the store about 10 or 15 minutes and when she returned to the parking lot, her car – and her son – were gone.

Surveillance video from the store captured images of a Honda Civic pulling up beside Archie’s Camry, then a suspect jumped out, got into Archie’s car and both vehicles drove away.

Police were called about the stolen vehicle, but, for reasons which aren’t known at this time, it wasn’t immediately made clear that the boy was inside the stolen vehicle. Upon learning this detail, the Mississippi Department of Public Safety was notified and an Amber Alert was issued.

Several hours later, the alert was canceled after Archie’s car was found abandoned on a road in Madison County about 15 miles from the Kroger store from where the car had been stolen. Just before noon, the Jackson Police Department confirmed Kingston was found deceased.

Upon learning of her child’s death, Archie collapsed and was carried out of the district attorney’s office by family members.

“All they had to do is let this kid off on the side of the road, at a grocery store, at a church, anywhere else, but they chose to kill the kid,” Heath Hall, spokesman for the Madison County Sheriff’s Office, said of the suspects, who were in police custody Thursday.

The suspects were identified as Dwan Wakefield, 17; D’Allen Washington, 17; and Byron McBride, 19. All three are facing capital murder charges and being held without bail at the Madison County Detention Center.

Relatives of the boy called the suspects “evil.”

“The innocence and life of a 6-year-old child have been taken by a horrific crime,’’ said Mississippi Gov. Phil Bryant. “It is time this senseless violence end. We can all pray that God will assuage the pain of Kingston’s family and friends, while we hold the guilty accountable.”

If convicted, the three suspects could face the death penalty.

Kingston, who was set to graduate from kindergarten this week, was described by the North Jackson Elementary School as “beloved by classmates and teachers” alike.