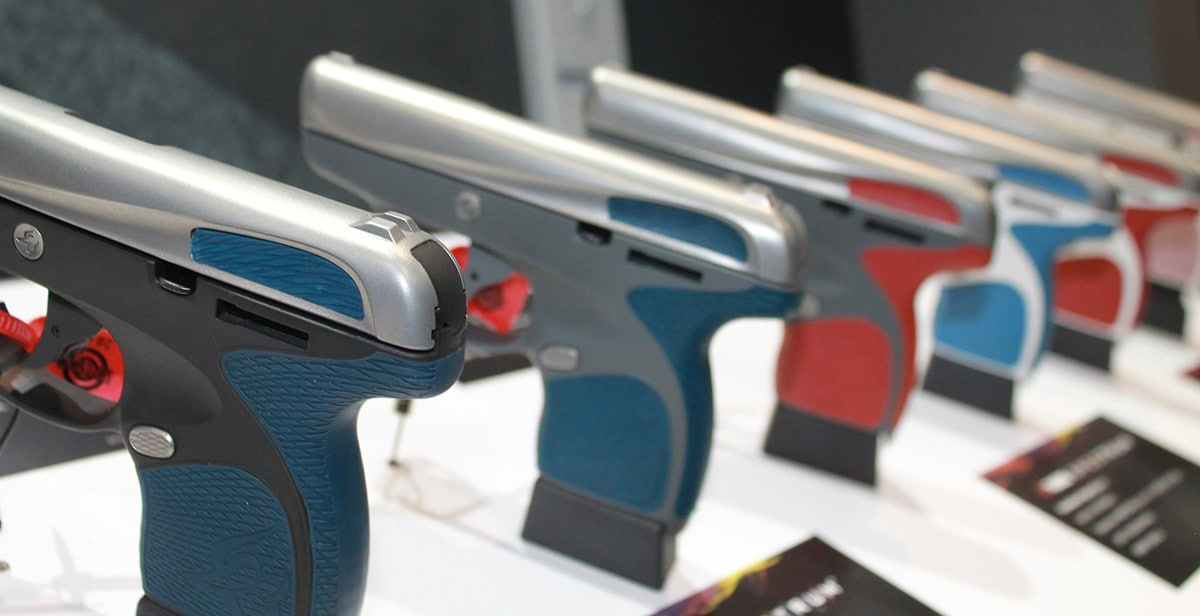 A row of eye-catching Taurus Spectrum pistols drew the attention of many consumers and industry folk at SHOT Show in January. (Photo: Jacki Billings)

A row of brightly colored Taurus Spectrum pistols lines the display at the Taurus booth four months ago at an industry trade show. Pink, red, royal blue and turquoise, colors presented straight from the factory direct to consumers. But Taurus isn’t the only one.

Filling the Shooting Hunting and Outdoor Trade Show floor this past January were several gun makers showcasing colored creations. SCCY and EAA boasted blue and purple. Kimber turned heads with its Bel Air blue and amethyst appeal. There’s no aftermarket Cerakote or Duracoat here, though. Each and every colored gun is direct from the company. No extra color tinkering required on the consumer end.

“Over the years black and stainless finishes were joined by earth tones of brown and green. Today, Kimber offers these classics along with everything from high polished sapphire blue and rose gold, to Bel Air Blue and purple,” Vandevoort said.

Kimber has become synonymous with gorgeous finishes and colors that pop. Vandevoort explained to Guns.com that flirting with fashion is as much fun for the company as it is for its stylish shoppers.

“It is fun, as a firearms manufacturer, to offer gun owners so many choices in color,” Vandevoort said. “Handguns are tools, but that doesn’t mean you shouldn’t be able to make more of a custom choice in style and function — similar to how we choose our cars.”

Though Kimber has been in the business of so-called firearm haute couture, Smith & Wesson is a rather recent entry into the world of patterned rifles. Though the company offered color variations on the original M&P 15-22 rifle, they stepped up their game with two new patterned options on the M&P 15-22 Sport line — Kryptex Highlander and Muddy Girl Camo.

Kryptek Highlender, a khaki-colored approach, seemed to aim itself at male shooters subverting the black gun culture, while the Muddy Girl Camo — well, the name says it all.

“We continually look at new patterns and colors that would offer more choices to the consumer,” Jan Mladek, general manager of M&P and Smith & Wesson brands, said to Guns.com via email. “When we launched the enhanced M&P15-22 SPORT rifle, we selected two of the most popular color options to expand our appeal to consumers.

The popular Kryptek Highlander and the Muddy Girl Camo finishes stood out as selections that would best complement our products.”

Though men turn to color — frequently earth toned patterns — to create uniqueness in their arsenal, women, especially, are eating up brightly colored creations.

Drjianna Betts, of Florida, sports a Ruger LCP but it’s anything but boring black. Opting for a blinding turquoise, Betts said she specifically chose Ruger’s .380 because they offered factory colored guns.

“I didn’t want to Cerakote a gun, so I specifically searched for a factory colored gun,” Betts told Guns.com in an interview. “I was originally going to get a standard gun, then I did a search for the LCP and saw all of the cool colors. I originally liked the pink, and then I saw the turquoise with stainless and fell in love with how it looked. So I figured, if I’m finally getting my first gun, it may as well be a pretty color too.”

Betts isn’t alone. Guns.com talked to almost a dozen women, all owners of non-conforming colored firearms, and the response was similar. Each women explained that their Tiffany blue or purple or pink gun made gun ownership more personal.

“I love bright colors, I love to be different. Even if I’m the only one really seeing it I like that it’s personalized for my style,” said Amy Londos, of Washington, sporting her Sig P238 in Rainbow Titanium.

Tuned into the needs and desires of consumers, gun manufacturers are steering the ship away from boring black and into the waters of fashion and style.

Expanding options to include colors gun owners are excited to carry will no doubt prove fruitful for gun makers willing to throw caution to the wind and break out the aquamarine.