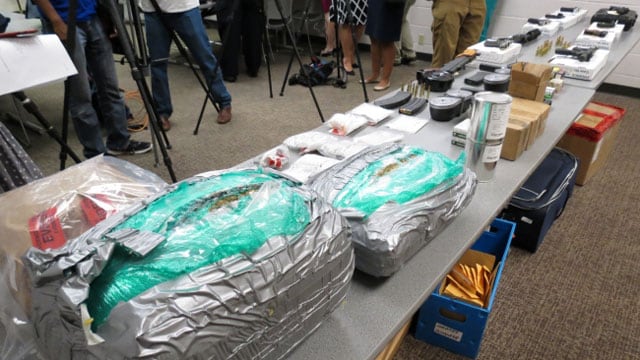 Officials announced Thursday the indictment of 25 people, including a postal worker and several pharmaceutical workers, believed to be involved in a Memphis-area drug-running ring.

The indictments came as the result of a seven-month long investigation conducted by the Memphis Police Department’s organized crime unit. The investigation was dubbed “Operation: Wait a Minute Mr. Postman.”

Through the investigation, authorities recovered 42 pounds of marijuana, three kilograms of heroin, one kilogram of Fentanyl, 1,421 grams of cocaine, 7,900 Oxycodone pills, 25 morphine pills, 13 handguns, 33 motor vehicles, three motorcycles and approximately $210,000 in cash, according to a statement from the Shelby County District Attorney General Amy Weirich.

Additionally, during a raid conducted last week, which resulted in the arrest of 20 people, authorities recovered another 7.3 grams of heroin, 5.9 grams of marijuana, .4 grams of crack cocaine, and two handguns. Four vehicles and $17,473 cash was also seized.

Among those named in the indictment was Letravius Shaw, 33, a letter carrier for the United States Postal Service. Shaw, who was taken into police custody Wednesday, is accused of using his position with the postal service to bring illegal drugs into the city. Authorities say Shaw willingly worked with O.B. Hildson, a member of the Grape Street Crips and also named in the indictment.

In addition, several of the defendants previously worked at a warehouse facility for a local pharmaceutic company and are accused of stealing thousands of Oxycodone pills from the facility.

All 25 defendants, who were indicted by the grand jury, are facing various felony drug and conspiracy-related charges. Seven of the defendants are known gang members, associated with the Grape Street Crips, the Traveling Vice Lords, and the Gangster Disciples.

Memphis Police Director Mike Rallings praised the efforts of the Organized Crime Unit, noting that hundreds of lives could have been saved.

“Thanks to the hard, dangerous work of these OCU officers, a significant amount of poison has been taken off the streets of our city,” Weirich said. “Far too many young lives are being lost because of fatal overdoses of illegal drugs. We are now ready to roll up our sleeves and prosecute these individuals to the fullest extent of the law.”

Rallings added that the drug epidemic has affected all types of people in the community.

“We need everybody on board to fight the infiltration of drugs and violence in our community,” he said.