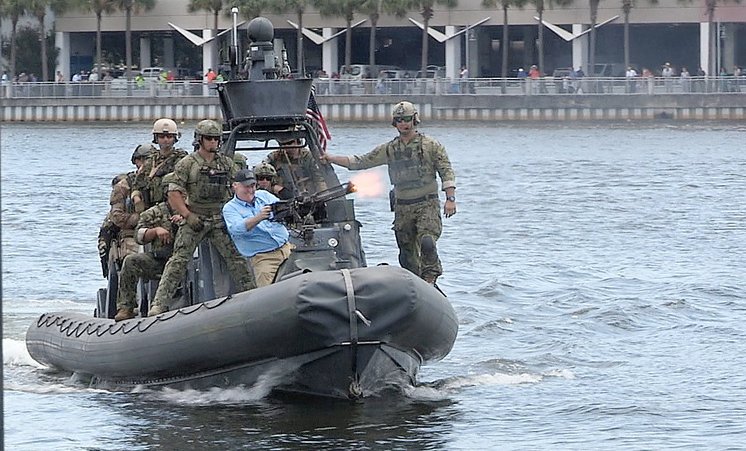 During his keynote address, the mayor told a story of how he was taken “hostage” during a special ops rescue demonstration. The most memorable moment, the mayor said, was when he fired blanks from a .50-caliber machine gun aimed at members of the press.

“And so the first place I point that gun is at the media,” Buckhorn told the crowd. “I’ve never seen grown men cry like little girls, for when that gun goes off those media folks just hit the deck like no one’s business. It’s great payback. I love it.”

Susan Katz Keating, a freelance writer who had firearms pointed at her while covering the conflict in Northern Ireland in 1988, said she took offense to the mayor’s comments.

“Personally, I was appalled,” Katz said on the Military Reporters & Editors Facebook page.

Buckhorn said such critics were being too sensitive and that he’s told the story dozens of times.

“I think that is a silly reaction,” he said.

The mayor indicated the comments were said “entirely in fun, tongue in cheek. They were not meant to be a reflection of my relationship with the media. I am the first one to defend the Fourth Estate. I am the product of it. I grew up with ink on my fingers. But you can’t be so politically correct that you lose the humor of the situation.”

Some journalists, including Daily Beast national security reporter Kim Dozier, said they were not just being thin-skinned. Dozier was nearly killed by a car bomb in Iraq in 2006 that took the lives of U.S. Army officer Capt. James Alex Funkhouser, his Iraqi translator and Dozier’s CBS colleagues Paul Douglas and James Brolan.

“As someone who had been under fire once or twice, and lost two colleagues to a car bomb in Iraq that nearly killed me, I didn’t appreciate the remarks,” said Dozier. “The mayor probably didn’t realize how many of the reporters in the room had risked their lives to bring Americans the story of U.S. troops in the field, including veterans-turned-journalists with prior special ops service.”

Reporters also thought it was surprising Buckhorn would take cheap shots at the media, as the mayor reportedly has a good relationship with the local press.

Reporter Sean Naylor said he understood the mayor was playing to the crowd but that it was “unfortunate that Mayor Buckhorn chose to get a few cheap laughs by implying that somehow reporters were cowards adverse to physical danger.”

According to the Committee to Protect Journalists, nearly 1,000 reporters have been killed worldwide, including nine so far in 2017.

While most journalists responding on the Facebook page seemed to take offense, Travis Tritten of the Washington Examiner took a different angle.

“Dangerous and inappropriate handling of a firearm,” Tritten said, adding that he would just “wave it off.”

The special ops demonstration will likely take place again next year, and Buckhorn doesn’t plan on backing down.

“I am firing blanks,” he said. “I point the gun at everyone, not just the media. I have to point it at someone, and someone is going to get mad at me for pointing it at them.”