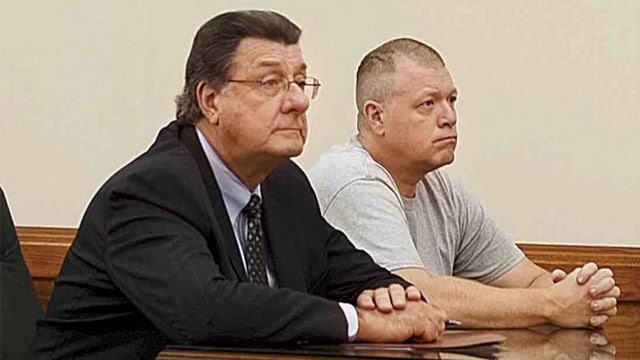 William P. Elschlager, right, listens to the judge during his arraignment on Wednesday. (Photo: Hannah Kittle/Parkersburg News and Sentinel)

A former Ohio State Highway Patrol lieutenant was arrested and charged last week with cyberstalking and deprivation of rights under color of law.

William P. Elschlager, 48, started having an affair with the wife of a colleague beginning in April 2015. By September, he started “being creepy,” according to a news release from the U.S. attorney’s office in the Southern District of Ohio.

It started when the victim, identified in a criminal complaint only as A.D.B., found a ball of what she believed to be her hair in his bathroom drawer, and photos of herself from social media in a folder on his iPad.

During the affair, A.D.B. would take naps at Elschlager’s home. One time she woke up to him taking photos of her. She told authorities she later found other photos of her napping, and that in some instances, she didn’t know he was home during the naps. Sometime in October 2015, she told Elschlager she didn’t want to see him anymore.

That’s when the alleged stalking began.

After ending things with him, A.D.B. started a relationship with a new man, identified in court documents as G.R. He lived on a farm in an isolated area. While at the farm house, she noticed a Cadillac at the end of the driveway. A few weeks later, A.D.B. spotted Elschlager following her in the same Cadillac. She later found out the car belonged to his uncle.

In December, Elschlager allegedly put a GPS device on A.D.B.’s car. That same month, he showed up at her house unannounced at least twice. One time, while with G.R. and her child in the backyard, she looked over and saw Elschlager in a vacant duplex staring at them. As they went inside, she looked back, and he gave her “an obscene gesture with his hand.”

Another time, while letting her dog out, she encountered a figure in dark clothes on her front porch. “It’s me,” he said, according to the complaint. Elschlager told her he accessed her husband’s personnel file to get information about her and her child so he could put them on his insurance policy.

In late December, A.D.B.’s car broke down and she posted about it to Facebook. Though she didn’t write anything about her whereabouts, Elschlager called her, texted her, and eventually showed up. The two argued, according to court documents. A tow truck driver said her radiator cap was missing. Elschlager left and came back in civilian clothes with a radiator cap and coolant, despite her insisting she didn’t want his help.

A search warrant of Elschlager’s electronic devices showed internet searches such as, “how long can a car go without a radiator cap,” and “did driving without radiator cap damage engine?” The searches were timestamped three days before A.D.B.’s car broke down.

On January 17, 2016, the Washington County Sheriff’s Office executed a search warrant at Elschlager’s home. They found GPS tracking software on his cell phone and home computer. They later found a tracking device on A.D.B.’s car.

On Elschlager’s phone, authorities found six videos of A.D.B. and G.R. at the farm house. Several of the videos were taken from outside a window of the home. A search of other electronic devices found internet searches for things like “obsessing over your ex sleeping with someone else,” “how to make your ex miss you,” and “how to hack a Facebook account.”

According to the criminal complaint, A.D.B. is still paranoid he’s watching her. When she sees a blue truck, she starts to have a panic attack and cries.

Elschlager was terminated by the highway patrol in March 2016. He faces up to six years in prison.