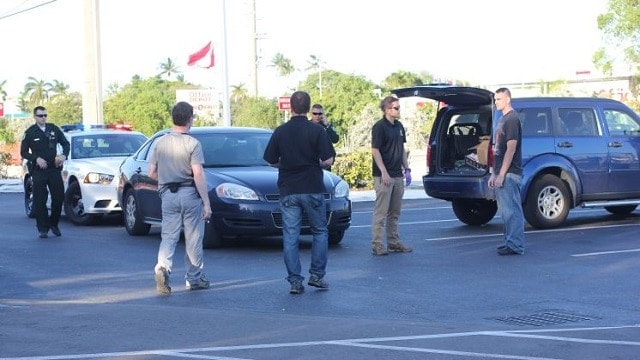 A man from Tampa Bay, Florida, has been charged with possessing an unregistered destructive device and unlawful storage of explosive material.

Tampa Bay police found the explosive devices in the Tampa Palms apartment of 21-year-old Brandon Russell, a self-proclaimed neo-Nazi and Florida National Guardsman, after responding on May 19 to reports of a double homicide.

According to a Justice Department news release, the two deceased men, Russell, and the alleged shooter, 18-year-old Devon Arthurs, had been living together at the apartment.

Previously on May 19, police had arrested Arthurs at nearby Green Planet Smoke Shop after receiving a call regarding a male who was possibly armed at the shop, according to a Tamp Bay Police press release.

Officers then interrogated Arthurs, who admitted to killing two of his roommates. Arthurs said he and his roommates had previously shared neo-Nazi beliefs and that Russell often threatened to kill people and bomb infrastructure in online neo-Nazi chat rooms.

The Tampa Bay Times reported Arthurs told police he had converted to Islam and killed his two roommates, identified as 22-year-old Jeremy Himmelman and 18-year-old Andrew Oneschuk, for not respecting his faith.

While searching the apartment, police found a cooler containing the explosive HMTD (hexamethylene triperoxide diamine), as well as a number of explosive precursors nearby, including potassium chlorate, potassium nitrate, nitro methane and more than a pound of ammonium nitrate.

Police arrested Russell in Key Largo on May 21. During questioning, Russell admitted to manufacturing the HMTD in his garage and to being a national socialist and member of the white supremacy group Atomwaffen, which is German for “atomic weapons.”

The Federal Bureau of Investigation and the Bureau of Alcohol, Tobacco, Firearms and Explosives are investigating the case, with assistance from the Tampa Police Department and the Monroe County Sheriff’s Office.