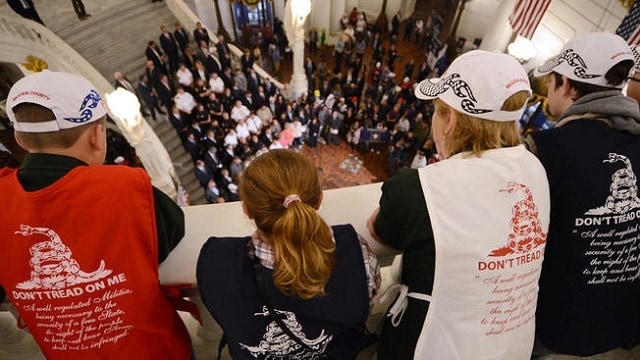 The rally, called “Make the Second Amendment Great Again,” attracted gun enthusiasts from all walks of life, including state lawmakers and sheriffs, the Associated Press reported.

Rosco Bickel, a retired machinist, came to the rally with a group of gun owners from Clarion County.

“The right to defend yourself is a God-given right. It is not even given by man,” said Bickel.

Republican House Speaker Mike Turzai spoke to supporters about fending off anti-gun proposals, such as one that would require gun owners to report lost or stolen guns and another that would require background checks for the private sales of long guns.

“Think about all the stuff we have held off, in terms of taking away your rights,” Turzai said.

Shira Goodman, executive director of CeaseFirePA, noted Pennsylvania averages around 1,400 gun deaths a year and said the debate about how to reduce those numbers should continue.

“Where can you carry a gun, who has the right to have a gun, what kind of weapon can you have — I think those are the debates,” Goodman said.

Speakers expressed their support for a House Bill 763, legislation that would do away with the Pennsylvania background check system and instead call for using the national background check system, and House Bill 671, which would make it easier to legally challenge local gun regulations that are stricter than state law. Support was also shown for a House Bill 170, a measure aimed to repeal the permit requirement for carrying concealed firearms.

The crowd cheered back as Republican Rep. Jason Ortitay, sponsor of HB 763, argued gun owners shouldn’t have to pay fees to exercise their Second Amendment rights.

Of his local gun ordinance bill, Republican Rep. Mark Keller said: “We need to get it done and get it done this year.”

“While we sleep, the other side works night and day to try and take away our constitutional rights,” Saccone told the crowd.