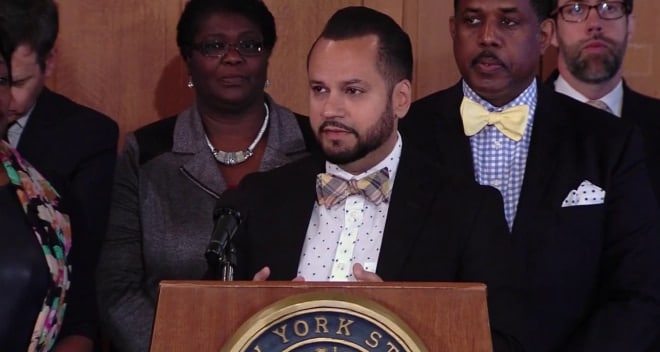 State Sen. José M. Serrano, a New York City Democrat, argues that only handguns incapable of being fired by a five-year-old should be sold in the Empire State. (Photo: Screengrab)

A group of Democrats in the state senate are backing a measure that would prohibit the sale of guns in New York State without child-proof features.

The bill, S.3444, would make it illegal to sell or transfer handguns one year after its passage unless the firearm was designed to where a five-year-old could not pull the trigger. Supporters think the move is needed to prevent accidental shootings.

“There is no reason that a young child five years old should be able to have access to a weapon that he or she could fire,” said the bill’s sponsor, Sen. José M. Serrano, at a press conference earlier this month.  “So we need to make sure that all weapons sold in the state of New York are not fireable by children this young.”

Serrano’s legislation would require that all new handguns sold in the state be childproofed. Suggestions in the bill’s language on how to accomplish the mandate include adjusting the trigger pull to at least a 10-pound draw, changing the mechanism to where a child’s hands are too small to operate the handgun, or requiring a series of multiple motions to fire the pistol or revolver.

Those found guilty of violating the measure should it become law would face a Class A misdemeanor punishment, including up to a year in prison or three years probation and a fine of up to $1,000.

The 2013 New York SAFE Act included both guidance and safe storage mandates to gun owners in the state and individual cities have passed local ordinances requiring guns not in use be locked up under threat of fines and jail time.

The measure is currently in the Senate Codes Committee while an Assembly version was submitted in that chamber in March.

Lawmakers have proposed similar bills in the past four sessions, all of which have died in committee.