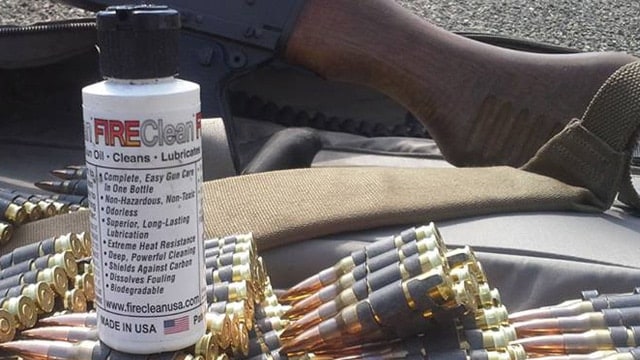 A bottle of FireClean on top of linked ammunition. (Photo: FireClean/Facebook)

The gun blogger accused of defaming gun lubricant maker FireClean has asked an Arizona federal court to dismiss the company’s second lawsuit against him.

The motion filed this month describes the renewed allegations against Andrew Tuohy, owner of Vuurwapen Blog, as “vicious” and “unprovoked,” and offered a new iteration of the arguments that successfully defended him in the first case.

“Like a 55-gallon drum attempting to be filled with 60 gallons of vegetable oil, FireClean’s Complaint is literally overflowing with broad, vague, conclusory, confusing and unsupported statements of law masquerading as allegations of fact,” the motion says.

Less than two months after a Virginia federal court dismissed the first lawsuit, FireClean owners David and Edward Sugg filed a revised complaint in Tuohy’s home state of Arizona. But instead of arguing that Tuohy slandered FireClean, they allege he infringed on the company’s trademark.

Almost two years ago, Tuohy published a review characterizing FireClean as a type of vegetable oil. His article contained a scientific analysis showing similarities between the chemical makeup of FireClean’s signature product and Crisco cooking oil. In the article, Tuohy said he was exploring an Internet rumor started by one of FireClean’s competitors that explicitly said “FireClean is Crisco.”

FireClean’s lawsuit claims Tuohy published the article and follow up reports to gain hits on his website and, by proxy, for financial gain, but the motion argues Tuohy’s website does not operate as a “for-profit” business — pointing out that it does not host advertisements and offers for sale only two types of t-shirt.

“Beyond its efforts to mislead this Court regarding Mr. Tuohy’s ‘clothing business’, FireClean never alleges that it competes with Mr. Tuohy in the ‘clothing’ industry, nor does FireClean allege that Mr. Tuohy competes with it in the gun oil/firearm lubricant industry,” the motion says.

Last July, a Virginia federal court dismissed the initial case alleging Tuohy conspired with another blogger to defame FireClean. But the court found that the conspiracy FireClean described was “not plausible” and affirmed that neither blogger originated the rumor.

In a separate case, FireClean sued the competitor that did start the rumor. George Fennell, owner of Steel Shield Technologies, said in multiple social media posts promoting his own products that FireClean was literally Crisco or some other commercial cooking oil. A Virginia federal court dismissed the case after both parties agreed to settle out of court.