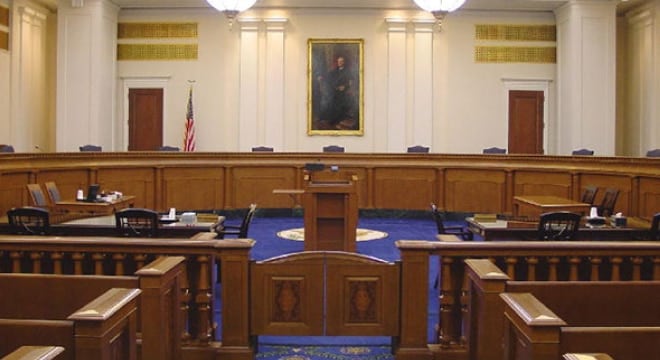 Sitting in Denver at the Byron White Courthouse, a three-judge panel of the 10th Circuit found a lower court had erred in the case of Alex Pauler. (Photo: USCourts.gov)

A unanimous panel of the 10th U.S. Circuit Court of Appeals found that a Kansas man prohibited from gun possession due to a prior domestic battery charge shouldn’t be.

The court on Tuesday overturned the conviction on a federal weapons charge of Alexander Pauler, a Wichita man found with a gun after his conviction on a previous misdemeanor crime of domestic violence made him a prohibited firearms possessor. The court held that only a history of domestic abuse convictions under federal, state or tribal law can strip away gun rights, while Pauler had been charged with breaking a Witch municipal domestic battery ordinance.

Under federal law, those found guilty of a misdemeanor crime of domestic violence can lose their gun rights, which Pauler was convicted of in 2009 after punching his girlfriend. He subsequently found himself in federal court in 2014 after he was found with a .40 caliber Glock in his vehicle after allegedly pulling it at a party and charged by a grand jury with possession of a firearm by a prohibited person.

Facing 24-30 months in prison, Pauler took a plea agreement in March 2016 that left him with five years probation but no jail time.

On appeal, the 10th Circuit overturned the lower court’s weapon charge this week, noting that the law “clearly and consistently differentiates between state and local governments and between state statutes and municipal ordinances” and prosecutors did not go on to argue that the word “State” is “even arguably meant to encompass both state and local governments or laws.”

Thus, wrote U.S. Circuit Judge Monroe G. McKay for the panel, “the government has not demonstrated that he [Pauler] was prohibited from possessing a firearm.”

Pauler’s attorney, David Freund, told the Associated Press the ruling comes as a victory for some who have lost their gun rights.

“It will really open up a class of individuals who are now able to lawfully exercise their Second Amendment rights,” Freund said.