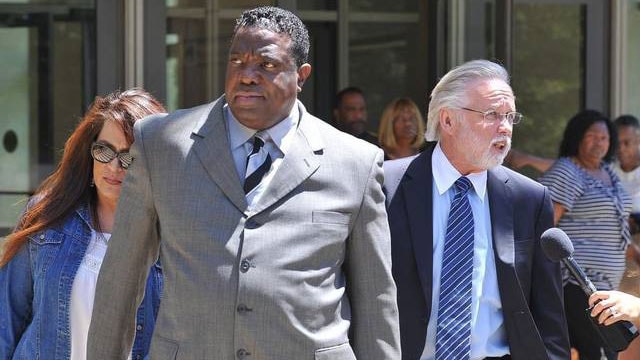 Former Fresno Deputy Police Chief Keith Foster outside of a California court during his trial. (Photo: The Fresno Bee)

A former Fresno deputy police chief was found guilty by a federal jury Tuesday of conspiracy to distribute and possess with intent to distribute heroin and marijuana.

Keith Foster, 53, faces up to 20 years in prison and a $1 million fine for the heroin charges and up to five years and a $250,000 fine for the marijuana charge. His sentencing is scheduled for Oct. 10.

During the trial, Foster was offered a plea deal that would have landed him four years in prison, but he turned it down.

“It’s unfortunate, but that’s our system,” Foster’s lawyer, E. Marshall Hodgkins, said of the verdict. “We tried the case we wanted.”

Marshall said he hoped his client’s “lifelong work in public service will have some impact on the sentencing.”

Foster, who resigned as deputy chief April 3, 2015, a week after his arrest, was charged with a total of eight counts, but the jury was hung on the remaining six counts.

Evidence presented at trial showed that throughout 2014 and 2015 Foster conspired with Rafael Guzman, 43, to obtain heroin for a third party. Foster also conspired with his nephew, 46-year-old Iran Dennis “Denny” Foster, to obtain marijuana from Ricky Reynolds, 50. Guzman, Denny Foster, and Reynolds are all named in the indictment, along with several other defendants accused of involvement in the drug-running scheme.

According to Special Agent in Charge Jill A. Snyder, San Francisco Field Division, Bureau of Alcohol, Tobacco, Firearms and Explosives, the ATF and FBI were involved in the investigation into the suspected drug trafficking conspiracy, and the evidence led directly to Foster.

Snyder said the actions of Foster and the other defendants not only put public safety in jeopardy but violated the trust of the citizens he swore to protect and serve.

At one point during the investigation, after traveling to Reynolds’ residence to obtain marijuana, Denny Foster was stopped in Merced County by the California Highway Patrol, who found six pounds of pot in the trunk of Denny Foster’s car.

Denny Foster was subsequently arrested, and an individual riding as a passenger in his car then placed a phone call to Keith Foster, who said he “could have provided cover” had he known about Denny Foster’s drug run ahead of time.

“When a police officer misuses his official position to commit crimes for personal profit, it is the ultimate betrayal of public trust,” said U.S. Attorney Phillip A. Talbert.

“The betrayal is only compounded when the officer involved is in a leadership position in the police department,” Talbert added. “By conspiring with others to traffic heroin and marijuana, Keith Foster not only disgraced the office he held, he put the community he was sworn to protect in danger.”

Fresno Police Chief Jerry Dyer has not yet commented on the verdict. Police spokesman Lt. Mark Hudson said Dyer “has to digest it all.”